What is seaweed? Plant evolution and biology 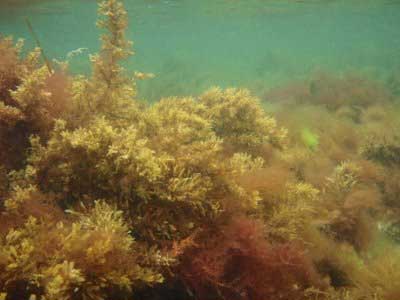 Seaweed in the ocean

For the first two billion years of life on Earth, there were only one-celled creatures. But after early eukaryote cells started to reproduce by meiosis in addition to mitosis, about 1.4 billion years ago, they were able to evolve faster by mixing up their DNA with the DNA from other cells. They evolved in all kinds of ways, but a few of them evolved to stick to their sister cells after their parent divided, and these became the first creatures with more than one cell.

When did seaweed first evolve?

Beginning about 600 million years ago, seaweed was one of these early plants with more than one cell. Seaweed lived in the ocean. During the Proterozoic period, when seaweeds first evolved, the Earth was much colder than it is now. Most of the Earth’s water was probably frozen into ice, and the oceans were shallower than they are now. Seaweed evolved to live in shallow ocean water, where there was enough sunlight for photosynthesis, and rocks to attach themselves to. 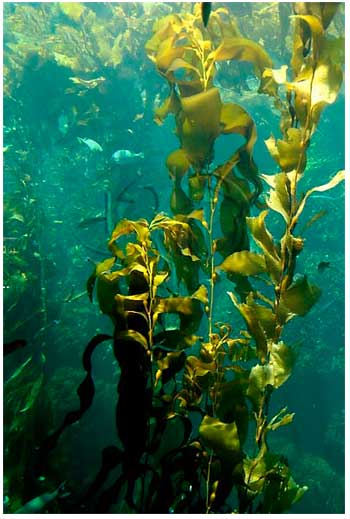 Kelp growing in the ocean

How does seaweed reproduce?

Because seaweed had more than one cell in the same plant, it needed a way to reproduce the whole plant and not just one cell at a time. Seaweeds reproduced themselves in two ways. Some seaweeds reproduced when a part of the plant broke off, maybe when a strong wave hit it or a rock fell on it. The small part of the plant could hold on to the rocks and grow into a new seaweed with the same DNA as the parent.

Seaweed also evolved other specialized cells that could help the whole plant survive. Different types of seaweed have different specialized cells. All seaweeds arrange their cells into flat leaves so that as many cells as possible get direct sunlight. Many seaweeds have holdfasts, finger-like projections like roots that hold on to the rocks. Some seaweeds have stalks that support the leaves like the stem of a flower. Some make hollow air-filled balls called floats, that hold the seaweed up closer to the surface of the water where there’s more sunshine.

But seaweed has no vascular system to distribute food and water. Instead, each cell makes its own food by photosynthesis inside its chloroplasts. Because seaweed doesn’t have a vascular system, scientists think of it as one of the algae instead of as a plant.

More about Japanese food
Next kind of plant – moss

Bibliography and further reading about seaweed: