What is meiosis? Cell reproduction – Biology

When did meiosis get started?

At first all eukaryote cells divided using a process called mitosis. But about 1.4 billion years ago, some eukaryote cells developed the ability to reproduce using meiosis instead. Meiosis (my-OH-siss) is a way for cells to get more diversity while they are reproducing.

What is mitosis?
What are eukaryotes?
The Proterozoic Eon
More cell reproduction
All our biology articles

How does meiosis happen?

When one of these cells reproduces, first each of these long DNA molecules, or chromosomes, build copies of themselves out of proteins, staying attached at the middle they way they do during mitosis. So now the cell has four copies of each DNA molecule that it needs.

What is DNA?
A DNA project
What’s a cell nucleus?
What are proteins?

Next, as in mitosis, protein spindles pull these X-shaped chromosomes apart, so that the cell ends up with four nuclei, each with only one copy of the DNA that these cells normally have. The cell then pinches together its cell membrane in the middle to make four small new cells, each with a nucleus and only one copy of the DNA. In each new cell, some of the DNA comes from the old mother DNA, and some of it comes from the old father DNA.

What is a zygote? 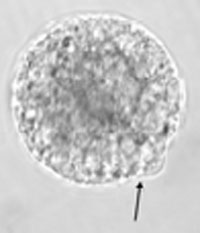 Two corn cells fusing. The big one is the egg, and the tiny one (where the arrow is pointing) is the sperm.

Then these new haploid (they have only half of their DNA) cells have to find other haploid cells to merge with. When they do that, they have made a new one-celled creature that has half its DNA from one parent and half from the other parent. We call the new creature a zygote. In this way, each new creature is a little bit different from its parents. Sometimes this is an advantage, and sometimes it’s a disadvantage, but overall the more diversity, the better the chances that at least some of these creatures will survive.

In multi-celled creatures, all of the cells are diploid (they have two copies of their DNA), but most of the time they divide using mitosis anyway. They use mitosis to grow bigger, and to repair problems (like if you cut yourself). Only the egg and sperm cells use meiosis, when the whole creature is going to reproduce (like when a bird lays an egg, or when your mother had you).

Some animals and plants, instead of having two copies, have four, six, or even eight copies of all their DNA. This polyploidy gets started when two sperm cells mix with one egg cell, or when an egg cell divides wrong. Usually this kills the cell, but sometimes it turns out to be useful for the creature instead. Some examples of successful polyploidy are wheat, cabbage, flatworms, goldfish, salmon, and salamanders, and our own liver cells.

History of wheat
What are flatworms?
What does the liver do?

Because meiosis makes each creature different from each other creature, it greatly speeds up the process of evolution. Once some cells began to use meiosis for reproduction, about 1.4 billion years ago, new kinds of creatures began to evolve much faster than before. By 600 million years ago, some of these were the earliest multicellular creatures, like hydras.

What is a hydra?
How about sponges?
Looking at a sponge (project)

What is Mitosis?
Cell Reproduction