What is a flatworm? Evolution and Biology 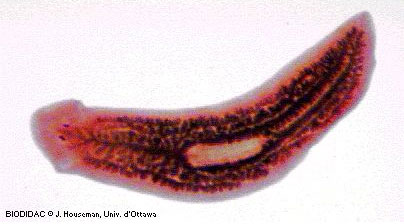 When did flatworms evolve?

The first flatworms, or platyhelminthes, probably evolved from something like a hydra about 550 million years ago.

What’s a hydra?
Proterozoic Eon
All our biology articles

Like all other living things at this time, these early flatworms all lived in the ocean. A flatworm has a body shaped roughly like a bag, like the earlier hydras.

How were flatworms new?

What’s inside a flatworm?

Inside, flatworms had a nervous system with most of the senses concentrated in the head end, so that when the flatworm moved forward, the head, which was in front, could detect danger in time to escape it.

Nervous system
What are neurons?
Evolution of eyes

Besides this early brain, there were just two long neurons that ran the length of the flatworm’s body. On top of the head, there were simple eyes that could sense light, like the eyespots on some eukaryote cells.

How did flatworms get food?

To get food, a flatworm took in food through its mouth, which was about halfway down its body, and then it excreted its poop out through its mouth again. Flatworms had no circulatory, respiratory, or skeletal system.

Because they’re so flat, most of their cells were on the surface, so they could get enough oxygen and food directly from the water around them. Flatworms did have some cells that were like early versions of kidneys – these helped keep the right amount of water in the flatworm’s body.

A nine inch long tapeworm from inside a cat.Thanks to dogbreedinfo!

What came after flatworms?

Probably around 545 million years ago, still in the Proterozoic period, not too long afterwards in terms of evolution, some of these flatworms evolved into roundworms.

But there were still plenty of flatworms around too, and there still are, today. Some flatworms now live independently in the oceans, and some live in fresh water, while others live inside people and animals, both in the ocean and on land.

Flatworms that live inside people

Flatworms that live inside people are tapeworms and flukes. Tapeworms have lived inside people and animals for so long that they don’t even have a digestive system anymore. They just get their food predigested by the animals they’re living in.

Did flatworms kill off the Neanderthals?
Roundworms

Bibliography and further reading about flatworms: