What are eyespots? Evolution of eyes – Biology 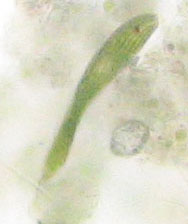 Euglena have red eyespots (thanks to Sharon Mooney)

When did cells learn to see?

About two billion years ago, or maybe a little later, some eukaryote cells developed the ability to see. That was during the Proterozoic period, not long after the first cells evolved. Sight was one of the first things that cells wanted to have.

What are eukaryotes?
What is photosynthesis?
When was the Proterozoic?
All our biology articles

The cells that had evolved the ability to photosynthesize needed light in order to make their food. So it was important to these cells to be able to find sunlight to use in the photosynthesis.

How do eyespots work?

Eyespots, like other parts of a cell such as lysosomes or golgi bodies, have a lipid membrane around them. Inside, they have as many as twenty different kinds of protein molecules. These often have a dark or reddish color, as you can see in the picture.

What are proteins?
What is a lipid membrane?

Eyespots and the flagellum

When light hits some of these proteins, the protein builds a molecule that tells the flagellum to start moving the cell in the direction of the light. These eyespots are the ancestors of eyes.

Bibliography and further reading about eyespots: