What is a Golgi body? Parts of a cell – Biology 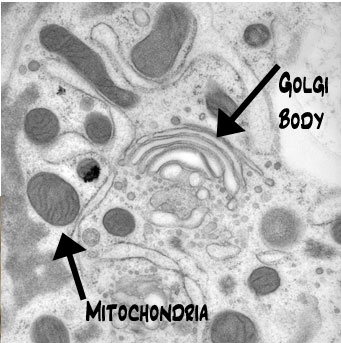 Image of a Golgi body. Taken with an electron microscope at the University of Melbourne, Australia

How does a cell make Golgi bodies?

What is RNA?
Endoplasmic reticulum
Parts of a cell
All our biology articles

They seal themselves into a little bubble. This bubble floats into the Golgi bodies, a little further away from the cell’s nucleus.

How did Golgi bodies evolve?

How do lipid membranes work?
The Proterozoic Eon

What happens inside a Golgi body?

Inside the Golgi bodies, if the atoms on the new molecule are in a certain order, then a few more hydrogen or carbon atoms stick on to that molecule when they come across it. These atoms make the molecule match up to other parts of the cell where they are needed. The Golgi body is like a factory that takes atoms and follows a pattern to assemble them into molecules.

So if the cell wall needs repairing, the RNA adds some atoms to a lipid molecule so that that molecule will fit into the cell wall, and not anywhere else in the cell. It’s like a puzzle piece that will only fit in one place in the puzzle. Or if you need more antibodies to fight a virus like influenza, the Golgi bodies can build them.

What is a virus?
More about the flu
Why should you get vaccinated?

Where do the molecules go then?

What are lysosomes?
What is the cytoplasm?

In the cytoplasm, the bubbles float around until they find the right place for themselves, whether that’s repairing the cell membrane, leaving the cell to do something outside the cell, or going over to a lysosome.