How do cells move around? The flagellum 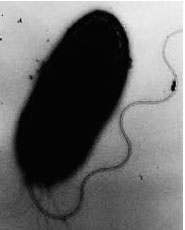 Bacterium with a flagellum (under a microscope)

Cells drift in the current…

The simplest cells, developing about four billion years ago, had no way to control their own movement. They lived in the oceans, and they floated wherever the water took them. Sometimes they found food there, and sometimes they didn’t. Most cells still live this way.

How did the first cells form?
The Archaean Eon
All our biology articles

When did cells evolve flagella?

By around 3.5 billion years ago, prokaryote cells began to control their own movements so they could get to where there was food on their own.

What’s a prokaryote?
How does natural selection work?

How did flagella evolve?

Inside these cells, proteins formed out of amino acids that were floating in the cytoplasm. When the process went wrong, sometimes the protein accidentally stuck out through the cell membrane into a long hollow tube that stuck out from the end of the cell, or little hair-like arms that stuck out all around the cell.

Where are amino acids from?
What are proteins?
What’s the cytoplasm?

These extra proteins turned out to be useful, because when the cell sent protons over to the end of the flagellum that was still inside the cell, the different electrical charges caused some atoms to be attracted and others to move away, and that forced the flagellum to spin around.

What are protons?
Structure of atoms

How do cells control the flagellum?

The cell could control the amount of movement by changing how many protons it sent. We call the long tail a flagellum (flah-JELL-um), and the little arms ciliae (SILLY-eye). Some cells have only one flagellum; others have lots of flagella (that’s the plural).

In prokaryote cells, the flagellum moves around and around, like a pinwheel. That pushes water away from the cell and moves the cell forward. Most of the cells on earth that can move still move themselves around this way. They move towards light, for example, using their eyespots.

What are eyespots?
Newton’s Third Law of Motion

Do all flagella work the same way?

No, there are two very different kinds of flagella. About two billion years ago, eukaryote cells developed a different way to move themselves around.

How eukaryote cells move around

Bibliography and further reading about how cells move around: