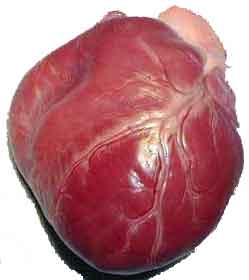 What is the circulatory system?

The circulatory system takes food and air from outside your body and brings it all over your body so that all your cells get the food and oxygen they need to stay alive.

The earliest cells, about 3.8 billion years ago, didn’t need any circulatory system. They had only one cell, so they could get their food and carbon dioxide directly from the ocean all around them.

More about hydras
The Proterozoic era

When did blood first evolve?

But about 550 million years ago, bigger, thicker animals evolved; first flatworms, and then roundworms. The worms needed not just one bag, but a series of tubes leading off from that bag, to carry ocean water all over their bodies.

What is a flatworm?
How are roundworms different?
And segmented worms?

To move the salty water through these tubes, and have it come back again to get more food and oxygen, part of the tube was made of muscle that could push the blood along. Instead of the salty water moving in and out of their bodies, segmented worms evolved a closed system, where the blood stayed in and the sea water stayed out. In certain places – the gut – the blood ran up against the seawater, and pulled food out of it.

Blood is really imitation ocean water, still carrying food and oxygen to your cells just the way the earliest cells got their food. But worm blood looks red because it has iron in it. The iron binds to the oxygen and provides an easy way to carry the oxygen in the blood.

More about iron
And about oxygen

By about 500 million years ago, fish developed gills. When the fish pumped blood over its gills, the blood could pick up oxygen more efficiently than before, so fish had more energy and could be more active than other sea creatures.

What are gills and lungs?
More about fish
And about lungfish 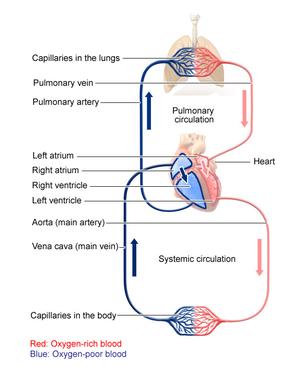 When lungfish developed into frogs and came up on land, about 340 million years ago, the frogs gave up their gills for lungs. Now they needed to get oxygen from their lungs all over their bodies. Frogs began to send the blood with oxygen in it back to the heart again, to be pumped out more strongly all over the body.

Circulation to the lungs

Evolution of reptiles
Mammals get going
What about birds?

But mammals and birds both evolved hearts with really separate chambers to keep the oxygenated blood separate from the blood without oxygen. This is a much more efficient way of using oxygen, and that’s one reason that mammals and birds have more energy than reptiles and we can run faster, stay awake longer, and generally get more done.
A few people are still born without that separation in their heart, but today doctors can fix that with an operation.

When did people figure all this out?

Doctors in ancient Egypt knew that your pulse was related to your heart-beat. In the 300s BC, thanks to cutting open dead people, they figured out that arteries and veins both carried blood, and that your pulse came from rhythmic throbbing of your veins. Herophilus figured out the difference between blood vessels and nerves. But he thought that But he thought that there was a sort of life-force, which he called the pneuma (“breath“), that flowed throughout your body with the blood in your veins.

By the 200s BC, the doctor Charaka in India knew that blood vessels both brought food to various parts of your body and also carried wastes away. In the 100s AD, the Roman doctor Galen understood that the heart pushed blood around the body. But he thought that air entered the blood within the heart, instead of in the lungs.

In the Middle Ages, the Egyptian Islamic doctor Ibn al-Nafis figured out that your heart sends blood to your lungs to get air.  He corrected the Iranian doctor Ibn Sina’s idea that the heart got its food from the blood in the right ventricle, and said (correctly) that the heart got its food from the coronary arteries. Another Islamic doctor about the same time, Ibn al-Quff, worked in Damascus (Syria). al-Quff figured out how the blood gets from the arteries to the veins through tiny capillaries.

Bibliography and further reading about the circulatory system: