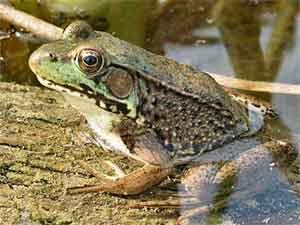 A frog sitting half in the water: Evolution of frogs

When did frogs evolve?

Frogs developed out of lungfish about 375 million years ago, in the Devonian period. They used their lungs to leave the water and live on land.

Read more about lungfish
All our biology articles

In the Devonian period, it was hotter and drier on Earth than usual. That’s because a lot of the land was gathered together into one continent, Gondwana. So a lot of smaller seas were drying up. The fish in these seas needed another way to live.

Why do frogs eat insects?

When the frogs first came out on the land, the only animals that were already living on land were insects, so frogs learned to eat insects, and that’s still the main thing that frogs eat. 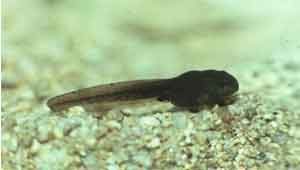 What’s the life cycle of frogs?

When frogs are first born, we call them tadpoles or pollywogs. Tadpoles look like fish, and they breathe under the water using gills, as fish do.

What are gills?
More about fish

But when the tadpoles are about two months old, if it’s warm enough, they turn into frogs (If it’s cool, the tadpole figures there’s plenty of water and just stays a tadpole).

The tadpoles begin to make a hormone that turns on various genes and makes the tadpoles grow legs and arms. Gradually the tadpoles lose their tails and their gills and begin to breathe air. Adult frogs have good eyes and ears, and an excellent sense of taste in their long tongues.

Like fish, frogs are cold-blooded, so they need to get warm by sitting in sunlight on warm rocks. If frogs get too hot, they go in the water or bury themselves in the ground to cool off.

How do frogs reproduce?

Being able to survive on land was a big advantage for frogs, and they did pretty well. But frogs still had to live close to water. They lay their eggs and their sperm in the water to make new tadpoles, and the tadpoles have to live in water.

Evolution of eggs
How does reproduction work?

Can frogs breathe through their skin?

Another reason frogs need to stay near the water is that frogs need to have wet skin most of the time. Frog hearts don’t pump blood with oxygen in it to their bodies very well.

Frog hearts mix blood with oxygen in it and blood without. To make up for this problem, frogs also can breathe air through their skins – but only if their skin is wet.

Bibliography and further reading about the evolution of frogs: