What are reptiles? Biology and Evolution 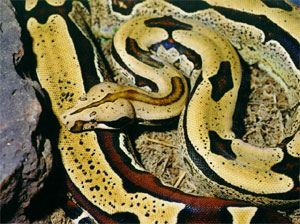 Some kinds of amphibians evolved into reptiles about 300 million years ago. At this time, plate tectonics had moved more and more of the land on Earth into one big continent called Pangaea. All the land being together changed the weather so that it was drier and colder than before. That was hard on frogs and other amphibians, who had evolved to take advantage of warm, wet conditions in the Early Carboniferous period, fifty million years earlier.

Some amphibians evolved into reptiles that were better adapted to the drier climate. Reptiles laid eggs with hard shells made of calcium, so they didn’t need water to lay their eggs in. Reptile babies were born with arms and legs, so they didn’t need water to swim in like tadpoles. Reptiles also developed better hearts, that gave them more energy than frogs had. These changes were a big success, and by 250 million years ago there were lots of reptiles all over the dry land, and swimming in shallow water as well. Even the big extinction at the end of the Permian period didn’t wipe out the reptiles.

About 240 million years ago, the land was all still together in one continent, but it began to get much warmer. New kinds of reptiles evolved, like turtles.

Snakes evolved from earlier lizards later than most of the other reptiles, about 150 million years ago. Around the same time, some of the smaller dinosaurs evolved into birds. Because there were already lots of small reptiles, birds evolved to eat lizards and snakes.