What are turtles? Biology and Evolution

The first turtles began to evolve from earlier reptiles about 225 million years ago, during the Triassic period. By about 210 million years ago, they looked pretty much like modern turtles. Turtles are one of the oldest kinds of reptiles that are still around today.

Turtles evolved to survive in a very different way from lizards. While lizards evolved to move quickly and flexibly, turtles evolved to move very slowly but safely. Gradually their ribs got wider and wider and their vertebrae grew bigger until they had both top and bottom shells, covered with skin. Their heavy shells slowed them down, but also protected them from bigger animals that might have eaten them. The earliest turtles had teeth, but later turtles gradually evolved to have beaks instead. 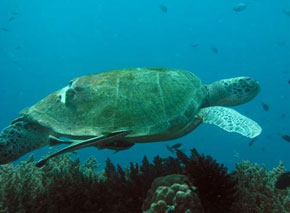 A sea turtle in Malaysia

During the Triassic period, the climate was good for cold-blooded reptiles like turtles, so they did well and many different kinds of turtles evolved. Some turtles returned to the water like fish and let the water support their heavy shells while they swam about (but even sea turtles still need to breathe air; they don’t have gills like fish). Sea turtles gradually evolved to have flippers instead of fingers and toes. But all turtles lay their eggs on land.

Turtles evolved when all of Earth’s land was together in one big continent, Pangaea. When Pangaea broke into pieces which floated away from each other to become the modern continents, about 180 million years ago, there were some turtles on each piece, so there are turtles all over the world today. Most of the giant turtles, however, became extinct about 100 million years ago, about the same time as the dinosaurs and possibly for the same reasons.

Bibliography and further reading about turtles: