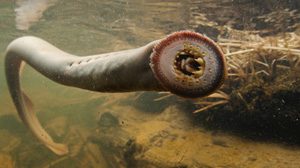 History of fish: it looks like a severed tentacle but it’s a lamprey.

When did fish evolve?

About 510 million years ago, in the Cambrian period, some of the worms on Earth evolved into the earliest fish.

Segmented worms
The Cambrian Period
All our biology articles

How were fish different from worms?

Fish were different from worms because they had spinal cords, nerves running all along their backs that carried messages to their other end. None of these earliest fish survive today, but lampreys are a lot like them.

What’s a spinal cord?
What are chordates?
Vertebrae do what? 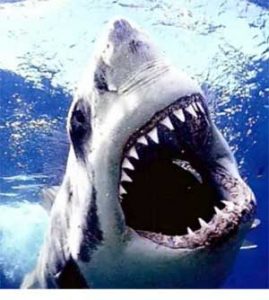 Soon after developing spinal cords, most fish also developed vertebrae to protect their spinal cords and keep them from getting broken.

First fish with jaws and teeth

These early fish weren’t very successful, and there don’t seem to have been very many of them. But then, about 420 million years ago, some fish evolved to have jaws. The earliest kind of fish that had jaws were sharks.

Jaws turned out to be very useful – nobody knows yet whether this was because they helped with eating or with breathing – and fish with jaws quickly became very common in Earth’s oceans and rivers.

Some fish have two sets of teeth

Possibly the jaws and teeth helped to pre-digest the food, so that the fish’s cells didn’t have to do so much of the work, and could save their energy for other things. Because fish with jaws and teeth had more energy, they could swim faster and catch more food than the older kind of fish. Some fish even have two sets of teeth – one in their jaw like yours, and another set in their throat. 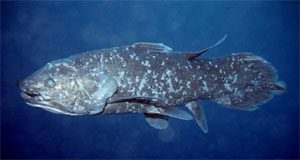 From oceans to rivers

By about 395 million years ago, there were fish in the rivers and not just in the oceans. These river fish were the earliest modern-type fishes with bones.

And back to oceans again

A different kind of early river fish, related to coelocanths (pronounced SEE-low-canth), became the ancestors of amphibians, reptiles, and all land animals.

Learn by doing: go to an aquarium and observe the fish
More about frogs

Bibliography and further reading about the history of fish: