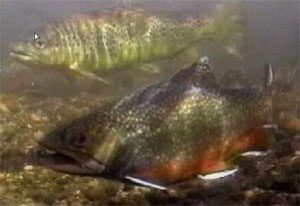 When was the Silurian period?

The beginning of the Silurian period was about 443 million years ago. Some environmental problem at the end of the Ordovician period (probably ice ages) killed most of the plants and animals on Earth. The creatures that survived this extinction were the ones that were most able to change quickly to adapt to new conditions. Then their ability to change speeded up evolution even more than before.

By 428 million years ago, the first tiny branching plant, Cooksonia, developed on land. More and more plants lived on land. They slowly evolved to be able to move away from the sea coasts and grow along the edges of lakes and streams. 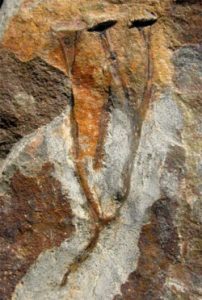 Fossil of the extinct early plant Cooksonia (about 2 cm high)

About 420 million years ago, the big continent of Europe slowly crashed into another continent, the beginnings of North America. The crash pushed big mountain ranges up towards the sky, which then eroded again into the ocean. The Earth had warmed up again since the Ordovician period and was warmer than usual, so there was more water and less ice.

The first fish with jaws

Around the same time, the first tiny fish with jaws appeared. They were descended from earlier chordates that were more like lampreys. For land animals, there were still just millipedes, spiders and scorpions.

The end of the Silurian period

At the end of the Silurian period, about 416 million years ago, a bunch of smaller environmental problems killed off a lot of plants and animals again and started the Devonian period.

Learn by doing: buy a whole trout at the store, cook it, and look at its skeleton
Go on to the Devonian period

Bibliography and further reading about the Silurian period and geology: