What are Chordates? (Animals with spinal cords) 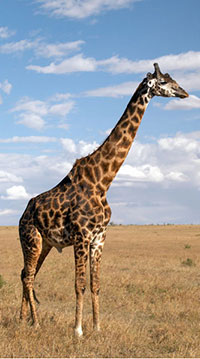 Chordates include this giraffe from Kenya

What is a chordate?

Any animal that has a spinal cord is a chordate. This group covers most of the creatures you see at home or in zoos, and most of the meat and fish that you might eat, and it includes you, too. All chordates produce eggs which turn into babies.

How did eggs evolve?
What is a spinal cord?
Before chordates: worms
All our biology articles

When did the first chordates evolve?

The first chordates were fish that evolved from worms around 510 million years ago, in the Cambrian era.

The Cambrian Era
More about fish

How did spinal cords evolve?

First worms evolved long neurons that could carry signals from the brain to the tail more efficiently, and then they evolved bony vertebrae to protect those neurons. This turned out to be a successful strategy, so there got to be a lot of fish and other animals – like you – descended from fish.

What are neurons?
Why do we have vertebrae?
Projects with vertebrae

These are some types of chordates:

Learn by doing: buy a whole fish, cook it, and carefully slice it open to find the vertebrae and the ribs. Or feel the vertebrae down a cat’s back.

Bibliography and further reading about chordates: