What is a brain? Biology and Evolution 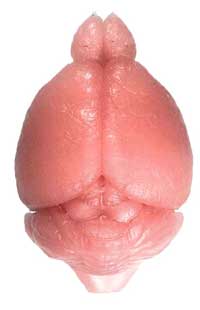 This is a mouse brain

When did the first brains evolve?

Flatworms were the first animals to evolve anything like a brain, but it’s really just a thickened part of the main nerve at one end of the flatworm. That was about 550 million years ago, in the Proterozoic period.

What is a flatworm?
More about nerves
All our biology articles

Why did fish have better brains?

The first real brains were in fish. That’s probably because fish had teeth and jaws and could eat enough food to provide energy for a brain. Fish brains were still pretty small and simple though.

When animals moved out of the water to live on land, they needed to evolve fancier brains that could help them to survive in this new environment. Reptiles have three parts to their brains.

More about reptiles
What are muscles?

The front part is for smell, the middle part is for seeing things, and the back part is for balance and for coordinating the muscles on the left and right sides of the body (just like in flatworms). Another small part of the brain, between the smell part and the seeing part, was used to put together all the data and figure out what to do.

How are mammal brains different?

What are mammals?
Early primates

Another big jump in brain size may have come when early humans learned how to cook food. Cooking food makes it easier to get a lot more energy out of it, so humans had enough energy to build bigger brains. Today, your brain uses about a fifth of the energy from the food you eat.

And about the nervous system

Bibliography and further reading about brains and the nervous system: