What happened in the Cambrian Period? 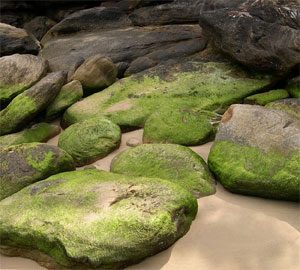 The Cambrian gets started

At the beginning of the Cambrian Period, about 542 million years ago, there were sea creatures like hydras, jellyfish, sponges and seaweed living in the oceans, but only one-celled algae on land yet.

First plants and animals on land

Small arthropods like beetles were beginning to appear, and by 540 million years ago the first land plants evolved from the land algae. These plants were like modern moss.

What is moss?
What are arthropods?

By about 530 million years ago, some of the small beetles may have been walking around on land, mainly on beaches when the tide had gone out. We find their tracks in sandstone from this time. These would be the first land animals. 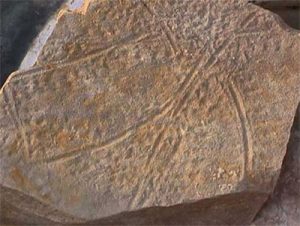 Tracks of a small beetle. The lines are from it dragging its tail between its legs. Cambrian period sandstone.

Earth’s land was broken up into smaller continents, but they were drifting closer together, and about 500 million years ago plate tectonics brought all of the land on Earth together to make a new supercontinent called Pannotia.

During the Cambrian period, there don’t seem to have been any more Ice Ages. Earth was probably a little warmer than it is today, and there were no glaciers at the North or South Pole.

Around this same time, evolution seems to have speeded up, so that suddenly many new kinds of animals and plants appeared on earth, evolving from the earlier ones. This is probably because meiosis allows more mutations and diversity in creatures’ genetics.

What is evolution?
How does meiosis work?
What is a mollusk?

Mollusks like snails and squid appeared for the first time. A few animals even had spinal cords, and were something like eels. But most animals still lived in the oceans. On land, there was still just moss, and a few beetles close to the shore.

What is a spinal cord?

How did the Cambrian period end?

At the end of the Cambrian Period, about 488 million years ago, most of the animals and plants on Earth died out. This is probably because of a global climate change or a lack of oxygen in the ocean, but nobody knows much about it. After this mass extinction, we begin a new period called the Ordovician Period.

Learn by doing: grow some moss
Go on to the Ordovician Era

Bibliography and further reading about the Archaean era and geology: