What is erosion? Geology 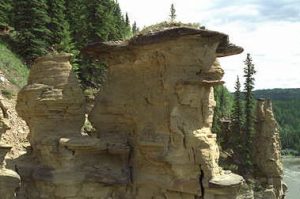 Erosion of a cliff in Canada

How did the Earth form?
What are igneous rocks?
The Hadean Eon
All our geology articles

Wind and rain eroded them

When the wind blew on these rocks, and when the rain washed over them, little bits of rock gradually broke off. That’s what erosion is.

What causes wind?
Why does it rain?

What are sand and clay made of?

Soil types
What is clay? 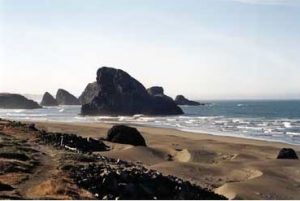 A sand beach in Oregon: Erosion at work

What are sedimentary rocks?

Beginning about a billion years ago, there were plants on land. When these plants died, the dead plants mixed with the sand and clay to make dirt. Like the sand and clay, dirt tended to fall or blow down from the tops of hills into river valleys. Then the rivers carried the dirt along the river valleys to the oceans.

When did plants evolve?
The Cambrian period
All our biology articles

River valleys have a lot of dirt

That’s why when people came along about 150,000 years ago, they found the best land for hunting and gathering, and later for farming, was in river valleys, especially near the ocean. The early cultures of the Egyptians in the Nile valley, or the Sumerians in the valleys of the Tigris and Euphrates rivers are examples.

So are the Chinese along the Yellow River, the Norte Chico in Peru, or the Bantu along the Niger river. The Woodland culture along the Mississippi River and the Harappans along the Indus river also settled in river valleys where there was plenty of good dirt (and also you could use boats on the rivers, and catch fish).

Who first figured out how erosion worked?

The Greek scientist Aristotle wrote about erosion in the 300s BC. More than a thousand years later, about 1000 AD, the Islamic scientist Ibn Sina wrote about igneous and sedimentary rocks, and how mountains erode away into nothing.