Gathering means collecting plants that grow wild for food. Early humans gathered all of their food from the land around them.

What foods did people gather?

At first, when all people were still in Africa, they mostly gathered figs, just as chimpanzees do. Then they added dry grass seeds, and roots, and shellfish – mussels and clams.

More about figs
How to eat figs
History of honey

Later on, when they moved to West Asia where the seasons changed more, men and women and children moved from one place to another: in February, they might be gathering wild greens like parsley, mint, or onions, and and chickpeas. In April, they climbed trees and cliffs to get bird eggs from their nests.

What are chickpeas?
History of eggs 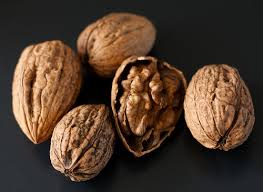 In May, kids searched for wild strawberries, and in June they harvested wild barley and wheat and millet and lentils. They cut straw to make hats and sandals and sleeping mats and baskets.

History of straw
What are lentils?

Later in the summer people picked figs and apples, and in the fall it was chestnuts and mushrooms and almonds and walnuts from trees.

Where are apples from?
More about mushrooms
How about chestnuts?
Olives and olive oil

In November, it was time for the olive harvest. In each season, they ate some of what they gathered, and stored some for other seasons by drying it or smoking it or pickling it. People also got food from hunting and fishing, but most of what they ate came from gathering. 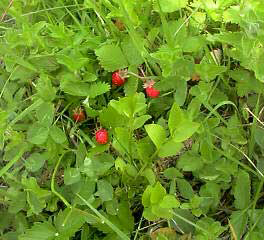 As people spread out all over the world, they kept on gathering clams and mussels. But they also gathered whatever grew in each place. In India people gathered sugar cane and bananas and cotton.

What is sugar cane?
History of bananas
Where is rice from?

Where are tomatoes from?
How about avocados?
History of chocolate

The addition of farming

Until around 8000 BC gathering was the main source of food. Around 10,000 BC, in the New Stone Age, people began farming, and therefore spent less time gathering. Now they grew figs and grain instead of gathering them. People soon also began to grow parsnips and peas and chickpeas and lentils. In the Americas, Native Americans began to grow corn and potatoes, peppers and peanuts. 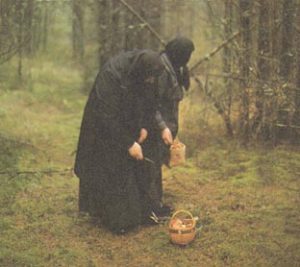 Yes, people kept on picking many wild foods. They picked berries, apples, pears, olives, and nuts. They gathered snails from bushes and mussels and clams from the beach. By the Bronze Age, around 3000 BC, people planted more kinds of food and gathered less. Still, they picked nuts, mushrooms, herbs, and berries in the wild.

Is gathering lazy and stupid?

It might seem like gathering is a lazy, disorganized sort of way to get food, and doesn’t need much knowledge. But really it is very complex. You have to know where the plants are, like where are the nut trees growing and where are the berry bushes. You have to keep track of when each of them will come ripe, so you don’t accidentally miss all the berries by not visiting their bushes the right week. And you have to arrange things so that you are in the right place at the right time.

Then also, once you have picked the food you have to preserve it and store it: you have to thresh the grain, and dry the berries and fruit and herbs, and pickle the olives. Usually people who get most of their food from gathering have a regular route that they travel around every year, designed so that they are at the nut trees when the nuts get ripe, and at the olives when the olives get ripe.

Why did people start farming?

But even with all this, studies of gatherers suggest that most gatherers only really work at gathering food for a few hours a day, much less than farmers work. That is, people began farming not because it was easier, but (probably) because it could feed more people on smaller patches of land.

Bibliography and further reading about gathering:

The Cambridge Encyclopedia of Hunters and Gatherers, edited by Richard Lee and Richard Daly (1999).By specialists, but accessible to interested adult readers.

Woman the Gatherer, by Frances Dahlberg (1983). A collection of essays.

Neanderthals, Bandits and Farmers: How Agriculture Really Began, by Colin Tudge (1999). An attempt to explain why people gave up gathering and began farming. Short, and not too hard to read.

Last Hunters-First Farmers: New Perspectives on the Prehistoric Transition to Agriculture, by T. Douglas Price (1995). A more academic book on the same problem.