Where do tomatoes come from? South America

Wild tomatoes in the Andes

The earliest tomatoes were little sour berries. They grew on low bushes in dry, sunny places in the Andes mountains in South America, beginning about 350 million years ago. Tomato plants are related to nightshade, which is poisonous. So the leaves and stems of tomato plants are poisonous, but the berries are good to eat.

Related to tobacco, peppers, and potatoes

The berries are red so that animals can find them easily and eat them. The animals carry the seeds inside them to other places and then poop them out – that’s how tomato plants find new places to grow. Tomatoes are also related to tobacco, chili peppers and potatoes. When people first came to South America about 20,000 years ago, they ate these tiny wild tomatoes.

Travelers brought a few kinds of wild tomato plants from the Andes to Central America, where the ancestors of the Maya began to farm them. Nobody knows exactly when people began farming tomatoes, but it probably was much later than corn and beans. It was definitely before 500 BC. These Central American farmers bred tomatoes to be bigger and sweeter than the wild ones. 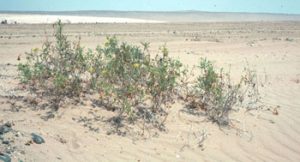 By the time Spanish explorers got to Tenochtitlan in Mexico, in 1521 AD, the Aztec people were eating a lot of tomatoes. They made a sauce of chopped tomatoes and onions and salt and chili peppers that was a lot like our salsa. Our word “tomato” comes from their Nahuatl word “tomatl”, meaning “swelling fruit”

History of tomatoes in North America

Because tomatoes weren’t farmed until pretty late, farmers further north had not yet been able to adapt their growing season to work in North America. Even today, it’s pretty hard to get your tomatoes ripe in the northern parts of North America, or in northern Europe, before the growing season ends.

Bibliography and further reading about tomatoes: