Who were the Nazca? South American history 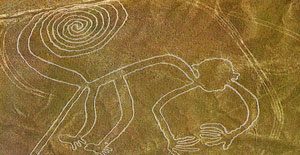 Nazca lines – a giant monkey drawn on the desert floor

After the Chavin state collapsed about 250 BC, two new states formed in Peru – the Moche in the north and the Nazca in the south.

What were the Chavin like?
More about the Moche
South America articles

So by about 100 BC, the Nazca were between the Moche and the Mapuche to their south, in what is now Chile, and the Guarani people were on the other side of the Andes mountains to the east.

Who were the Mapuche?
How about the Guarani?
The Andes Mountains 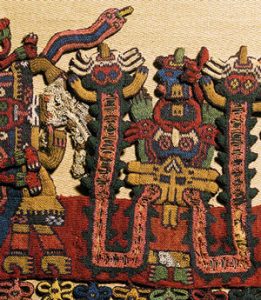 Like their ancestors and like their neighbors, the Nazca people did a lot of fishing along the coast using small reed boats, and they collected shellfish too.

Like the Chavin and the Moche, they farmed potatoes, tomatoes, squash, beans, corn, peanuts. The Nazca grew cotton, too, for their clothing. To bring water to their farms, the Nazca built a lot of irrigation canals and underground aqueducts.

History of peanuts
South American food
Where did cotton come from?

Nazca people used nalbinding (a kind of early knitting) and embroidery to make complicated, expensive clothing. They made a lot of their clothes from cotton, but they also used alpaca wool to make warmer clothes.

Decline of the Nazca

By the 500s AD, the Nazca weren’t doing so well. Possibly they had cut down a lot of trees to make room for their cotton and corn farming and that caused erosion. Terrible floods wiped out a lot of their irrigation system. About 750 AD, the Nazca culture collapsed into a bunch of smaller states. By 1400 AD, the Inca built an empire that unified Peru.

Go on to the Inca
More about the Moche

Bibliography and further reading about the Nazca: