Who were the Moche? South American history 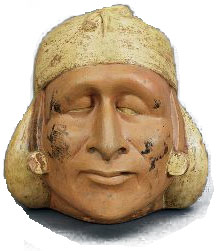 When did the Moche get started?

The collapse of the Chavin state in Peru, about 250 BC, seems to have opened the way for the Moche and the Nazca to develop states of their own. The Moche started up around 100 AD along the Pacific coast of South America, in what is now northern Peru.

The Chavin, before the Moche
Who were the Nazca?
All our South America articles

What did Moche people eat?

The Moche kingdom was mainly based on farming the same foods that the earlier Chavin people ate: potatoes, chili peppers, corn, beans, yuca, avocado, coca, quinoa, squash, sweet potatoes, peanuts. Many of these crops were not native to Peru, but they had come to Peru from other places in Central America and South America, and people had started to farm them in Peru by this time.

To help with the farming, the Moche built big complicated irrigation systems all over the area they controlled. Like earlier Peruvian people, the Moche did a lot of fishing from boats made of bundles of reeds. 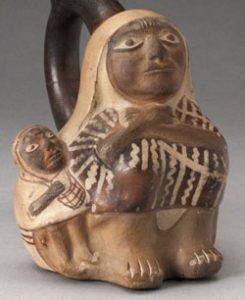 Nobody knows exactly what the government of the Moche was like. It may have been an empire, or it may have been a bunch of independent city-states united by having the same language and culture, like classical Greece just a little earlier. Moche women seem to have held some power, judging from their appearance in mural paintings and their rich tombs. That makes it seem more like an empire, because women don’t usually have much power in city-states.

What happened to the Moche?

The Moche continued to control much of modern Peru until about 600-800 AD, when their empire seems to have collapsed. This collapse may have been caused by climate change about this time. In its place, the Inca empire formed.

Learn by doing: cook a Peruvian stew
More about the Inca