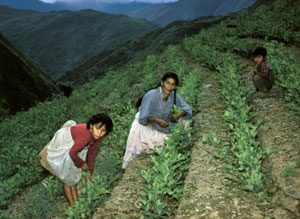 History of coca leaves: Coca farming in the Andes Mountains

When did coca plants evolve?

Like potatoes, tomatoes, and tobacco, coca plants grow wild in the Andes Mountains of South America. They probably evolved around the same time as the other flowering plants, around 120 million years ago, in the Cretaceous Period.

Coca plants make a poisonous substance called cocaine in their leaves. That’s probably to make their leaves taste bad and make you feel bad, to keep animals from eating them. 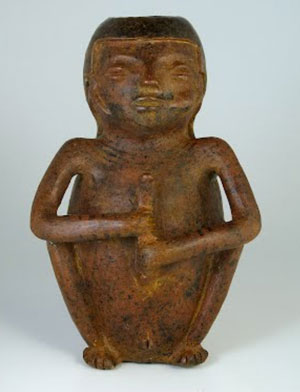 But in small quantities, cocaine can make you feel pretty good. When people first arrived in South America, about 13,000 BC, they probably started chewing coca leaves right away.

Coca leaves, like tobacco, coffee. cocoa or tea, help you stay awake longer and work harder than you could otherwise. They help you not feel pain, too.

People mixed coca leaves with powdered lime (burnt limestone) to make them less acid to chew. Doctors prescribed coca to both men and women to help with arthritis, cancer, or other serious chronic pain.

What is limestone?
Sedimentary rocks

When did people start to farm coca plants?

By the time the Valdivian people in Ecuador were farming potatoes, about 3000 BC, they were probably also farming coca. By 2000 BC, Norte Chico people were also farming coca. Moche and Inca people, in antiquity and the Middle Ages, also farmed and chewed coca. Inca rulers also sacrificed coca to their gods by burning coca leaves.

History of potatoes
Who were the Moche?
When was the Inca Empire? 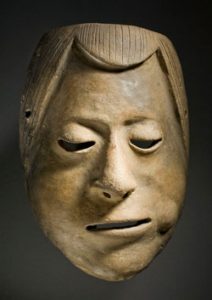 Where did people chew coca leaves?

Across the Andes mountains in Paraguay, Bolivia, and Argentina, the Tupi and Guarani people chewed coca leaves too.