History of Chocolate: Where does chocolate come from? 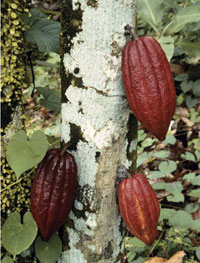 History of chocolate: Cocoa pods grow right from the trunk of the cocoa tree! (Thanks World Cocoa Foundation)

Chocolate comes from cacao beans, which grew on trees in Central America and South America starting probably about 100 million years ago. Cacao trees may have gotten their start on the lower slopes of the Andes Mountains. Cacao trees can only live in hot, rainy places near the Equator. 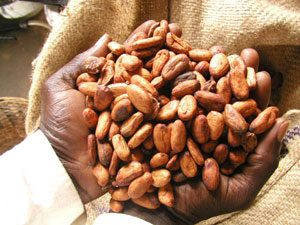 The trees bear large orange fruit, about the size of small pumpkins. You pick the fruit, and many small beans are inside, like peas inside a peapod. The raw beans are really good for you, full of vitamin C and magnesium, but they’re bitter.

The beans also have a fair amount of caffeine in them, like coffee or tea, and can help you work harder than you could without cacao.

When did people start to farm cacao?

The history of chocolate goes back a long way! People probably ate cacao beans as soon as they got to Central America, maybe about 15,000 BC. Cacao grew in the high Andes mountains. By 3000 BC, neighbors of the Valdivia people in Ecuador, and probably their Norte Chico neighbors in Peru, were farming cacao. 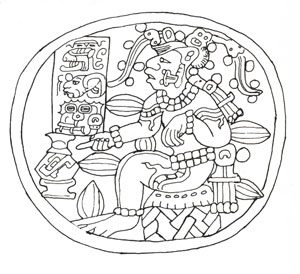 Cacao farming spread quickly north to Central America. By around 2000 BC, pre-Olmec people in what is now Mexico were grinding up the beans and making them into a hot or cold spicy chocolate drink. They made chocolate drinks with vanilla or chili peppers in them. And they made a sort of spicy porridge with corn and chilis in it. Sometimes people sweetened chocolate with honey.

History of honey
Why do bees make honey?

Many people of Mexico, Central America, and South America – the Olmec, the Zapotec, the Moche, the Maya, the Arawak, the Tupi, the Inca, and the Aztecs – liked chocolate. Our word chocolate probably comes from the Aztec phrase cacaua atl which means cacao drink. 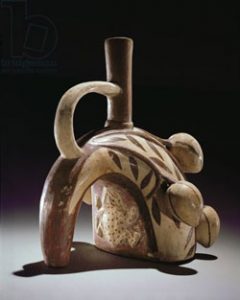 Moche clay pot in the shape of a frog climbing a cacao tree (ca. 500 AD)

The Maya and the history of chocolate

By the 600s AD, Maya and Arawak farmers were growing cacao trees instead of picking wild cacao, though Tupi people were probably still gathering wild cacao. Maya people said that the god Quetzalcoatl had brought cacao trees down from heaven and given them to people to farm.

Who were the Arawak?
And the Maya?
Where are the Tupi from?

During the 1400s AD, the Aztec Empire controlled most of Mexico. The Aztec government made people pay a lot of their taxes in cacao beans. Cacao beans were good for money because they were expensive and you could store them for a long time.

More about the Aztec Empire
The history of taxes
How does money get started?

By this time, Aztec merchants also sold cacao beans to the Pueblo people to their north, in what is now Arizona, New Mexico, and Colorado. Pueblo people lived too far north to grow their own cacao. Cacao became an important trade item. But once the government made people use cacao beans as money, most people couldn’t afford to actually eat them anymore. Then only rich people drank the chocolate drinks.

When the Spanish invaded Mexico and the American Southwest in the late 1400s AD, naturally they tried chocolate, because it was a special treat for rich people. They brought it back to Europe with them.

History of chocolate in Europe

Did you find out what you wanted to know about the history of chocolate? Let us know in the comments!