Where does chili pepper come from? South America 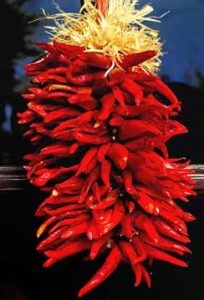 Chili peppers from Central America: a chili pepper is hot!

There are two main kinds of pepper: black pepper and chili pepper.

Where do hot chilis come from?

Chili peppers come from South America, and they’re related to other South American plants like tomatoes, tobacco, and potatoes.

More about tomatoes
When did people start farming tobacco?
Where are potatoes from?

Why is chili pepper spicy?

Chili doesn’t taste hot to birds, so possibly the hot taste evolved so that birds would eat the fruit and mammals wouldn’t – birds do a better job of spreading chili pepper seeds. Or maybe it’s the other way around, and they’re spicy so people will eat them and spread the seeds? Nobody knows for sure.

When did people start to eat chili peppers? 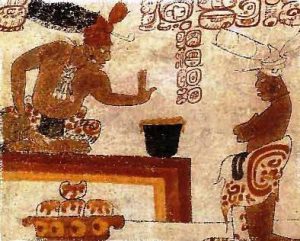 Maya meal – tamales with chili sauce are under the table.

Chili peppers were one of the main foods of the Maya, along with corn, squash, and beans.

Who were the Maya?
The Three Sisters

Maya people often added chili peppers to tortillas or tamales to give them more flavor. They also mixed chili with chocolate and honey.

History of chocolate
Where did honey come from?

The Aztecs and chili peppers

But our word chili is not from Maya but from the Nahuatl (Aztec) word “chilli”. A very common Aztec meal was corn tortillas dipped in chili sauce. Aztec people also liked to mix tomatoes and avocados with chili to make salsa and guacamole.

History of avocados
How to make guacamole

Chili peppers spread around the world

When Spanish colonizers reached the Americas in the late 1400s, they learned to like chili peppers too. They brought chili pepper seeds to other places, along with other foods like peanuts and sweet potatoes.

History of peanuts
Where are sweet potatoes from?
African food and colonization
Chinese food after 1500 AD

Soon people were eating chili peppers in China, in Vietnam and Thailand, in India, and all over Africa. People loved the new taste! Today, spicy food made with chili peppers is totally normal in all of those places.

Learn by doing: go out for Mexican food!
More about Black pepper