Where does black pepper come from? India 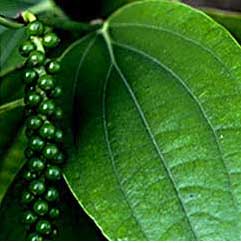 What kind of pepper?

There are two main different kinds of plants that we call “pepper” – chili peppers and black pepper. Black pepper is the kind of pepper you think of when you say “salt and pepper”.

Where are chili peppers from?
More about Indian food
All our India articles

When did people start to eat pepper?

People in South India were already gathering black pepper to spice their food in the Stone Age. Farmers in South India began to grow pepper by around 3000 BC.

What was happening in 3000 BC?
The Stone Age in India

When did India start to sell pepper?

By about 2000 BC, traders were bringing Indian pepper to other places, first to North India and then to West Asia. At first people were surprised by the spicy taste. The North Indian word for pepper – pipali– comes from an early Indo-European word “pip”, probably the sound people made when they spit out something spicy, like “ptui!” By the New Kingdom, traders brought pepper to Egypt. In 1213 BC, someone in Egypt put pepper in the nostrils of the Egyptian Pharaoh Ramesses II when he died.

Black pepper in Europe and China

By about 500 BC black pepper was available in Greece. It was expensive, but many well-off families used it. By about 100 BC, black pepper also reached Rome and then the rest of Europe, where pepper was about four times as expensive as it is today. Heading east, black pepper reached China somewhat later, around 200 AD. Pepper gradually became very popular in China too, and by the 1100s rich families in China were starting to use a lot of black pepper.

By this time, Indian and Chinese traders were also going to Indonesia, where they bought another kind of pepper – long pepper. They sold long pepper too. Like black pepper, long pepper was a little spicy. But it was not super spicy like chili peppers.

Black pepper in the Islamic Empire

At the same time, pepper was very popular in the Islamic Empire. Islamic traders brought pepper to Europe, but still for very high prices. It was partly because Europeans wanted to get pepper cheaper that they began in the 1400s AD to figure out how to sail south around Africa to India, and sent Columbus west to see if he could get to India that way.

Learn by doing: grind up some black peppercorns with a mortar and pestle
More about peppers – Chili pepper

Bibliography and further reading about pepper: