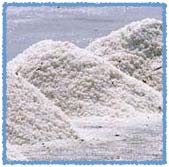 A pile of salt

In the Stone Age, people didn’t need to find salt, because they were hunting a lot of their food, and eating a lot of red meat. Red meat has plenty of salt in it, naturally, without having to go find any extra salt.

But when people began to farm, about 10,000 BC, they started to eat mainly grains like rice and wheat and barley and millet, and very little meat. Then they really needed another way to get salt. And when people began to keep cows and sheep, they needed to feed the animals salt too. People also used salt to preserve all different kinds of food, because there were no refrigerators -you use salt to make bacon, or ham, or salted fish, or pickles. 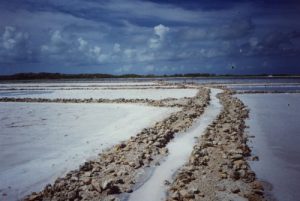 Salt flats for evaporating the water to leave the salt

The earliest evidence we have for people producing salt comes from northern China, where people seem to have been harvesting salt from a salt lake, Lake Yuncheng, by 6000 BC and maybe earlier.

By about 4500 BC, Central Asian people along the shores of the Caspian Sea (in modern Azerbaijan) were mining rock salt underground. This is the earliest known salt mine in the world. Probably these people were selling the salt along early Silk Road trade routes, perhaps in exchange for copper or obsidian, wheat from West Asia and milletfrom China.

In Egypt, people were using salt to preserve meat and fish by about 3000 BC, around the beginning of the Old Kingdom. The Egyptians also used salt to preserve mummies. They evaporated seawater from the Mediterranean Sea, and also bought salt from Libya, Sfax in Tunisia, and Nubia to their south.

By 800 BC, Chinese written records tell us that people in China were producing salt by filling clay jars with ocean salt water and boiling it until the water boiled away and only the salt was left. After the Chinese learned how to make iron from West Asia, about 700 or 600 BC during the Eastern Chou dynasty, they started using iron pans instead of clay ones to boil water for salt; this saved a lot of fuel. They were definitely using iron pans by 450 BC. The Etruscans in Italy, and the early Romans, and the Carthaginians in North Africa, also used evaporation to produce salt.

About the same time (700 BC), in Europe, the Indo-European Celts were mining salt underground in modern Austria, Hungary, southern Germany and Poland. The Celts sold their salt to other people – the Greeks, the Etruscans, and the Carthaginians, maybe the Phoenicians. The Celts also sold salted meat – salami, ham, and bacon. In exchange, the Celts bought glass and pottery for their houses and their graves.

Learn by doing: try to evaporate some salt out of seawater
More about salt
What about pepper?

The geology of salt
Salt as a kind of molecule
Quatr.us home