People eating in Virginia, about 1550 AD (from the British Museum)

In 1500 AD, most of the people living in North America, like the Pueblo, the Cherokee, the Iroquois, and the Mississippians, ate mainly beans and corn and squash. Sometimes people ate their corn baked into tacos or tortillas; other times people boiled corn into mush or soup. To go with the beans and corn, people ate the meat of wild animals – venison (deer meat), buffalo, rabbit, turkey, or pigeon.

If they lived near a lake or a river, they ate trout or salmon or the other fish and frogs that were in those rivers. People who lived near the Atlantic or Pacific oceans ate clams, crabs, oysters, and lobster too. Everywhere, people also ate wild berries and nuts, and roots like sweet potatoes, and another root we don’t eat much today called wapato. 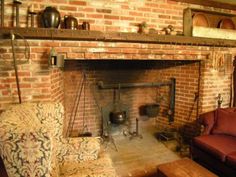 A fireplace from Colonial times

Some people, like the Chinook, the Inuit, or the Navajo, did not eat beans or corn at this time. They didn’t farm, so they ate only things that could be gathered in the wild. In place of the corn and beans, they ate acorns mashed up and cooked into flat bread, or wild rice.

When European settlers began to settle in North America, they soon learned to eat like the Native Americans – mainly a lot of sweet potatoes and corn and beans and meat and berries and nuts. But the Europeans also brought European animals with them, so they also ate pork and beef and mutton (from sheep) and chicken. They smoked the pork to make hams and bacon, and they got eggs from the chickens. Instead of cooking on open fires like the Native Americans, the Europeans mainly cooked over fireplaces.

By the 1700s, more of the European settlers had arrived, and they began to plant wheat and barley to make into flour for bread. Now they didn’t eat as much corn, but instead they ate more bread and porridge. In some places, there were so many settlers that it got hard to find enough deer or wild birds or rabbits to hunt, so keeping animals for food was the only way to get meat. 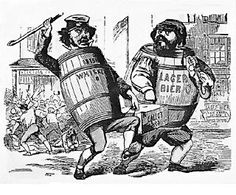 In the 1800s, as people came to settle in North America from all over the world (especially Europe, Africa, and China), they all brought their own foods with them. From Africa, people brought yams, or sweet potatoes, and black-eyed peas, peanuts (originally from South America), and okra. Chinese people brought with them rice and Chinese vegetables like bok choy.

By the 1880s, many European immigrants were Italian and Jewish people. From the Italian immigrants, Americans learned to eat pizza, spaghetti, lasagna, and ravioli. People also started to drink more wine. Jewish immigrants brought with them bagels, challah bread, pastrami sandwiches, and cheesecake. 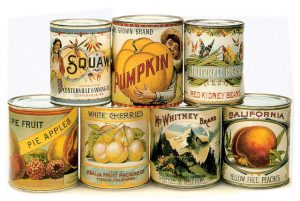 Canned food from the early 1900s

But the biggest changes in food came in the 1900s, when the use of oil and machines made it possible to bring fresh milk and vegetables to the cities all year round, by putting Florida oranges and California avocados on fast trains. Oil engines also made possible canned food and refrigerators, both in stores and in people’s houses. Because of the machines being used to plant and harvest food, and the machines being used to process it, food became much cheaper and easier to get than it had been before. The most important difference of the 1900s is that suddenly very few people were hungry, where in the past – from the Stone Age to the 1800s – most people never knew what it felt like to have enough to eat. 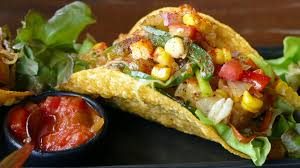 But we still eat a lot of Native American foods

More recently, immigrants have brought Japanese sushi, Korean kimchi and bibimbop, and Indian curries. But some things still stay the same. Most of the crops grown in North America today are the same ones grown before the Europeans came – corn, sunflowers, beans and potatoes. The fruit and meat that people ate before the Europeans came are also still important in North America today – salmon and turkey and blueberries. And tacos and tortillas are still common foods in America today, just as they were before the first European settlers arrived.

Learn by doing: cook an American dinner for your family
Native American Food

The Little House Cookbook: Frontier Foods from Laura Ingalls Wilder’s Classic Stories, by Barbara Walker (1979). Traditional 19th century settler recipes, from cornmeal mush to fried parsnips. Not the most health-conscious, but there are some great ideas here if you need food for a class project.

The African-American Kitchen: Food for Body and Soul, by George Erdosh (1999). For kids – the foods Africans brought with them to North America, and how popular those foods are in North America today, with good pictures and recipes.

The History Of Food (Major Inventions Through History), by Judith Jango-Cohen (2005). Written for teens. From canning to freezing and genetically modified food, a careful account that shows the problems of rotting food, but also acknowledges the problems brought by new technology.

What’s Cooking: The History of American Food, by Sylvia Whitman (1996). Written for teens. Leaves out America before the Europeans arrived, and the tone is patronizing, but there’s some good information here, too.