Mediterranean Food in the Roman Empire 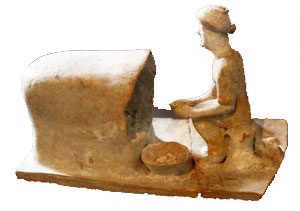 Poor people who lived near the Mediterranean Sea had to eat food that would grow in very dry areas, with light and not very fertile soil. Mostly they ate what archaeologists call the “Mediterranean triad” or three things: wheat and barley (made into beer or porridge or flatbread or soup), olive oil (soaked into the bread, or on vegetables), and grapes (made into wine, vinegar or raisins so they would keep). People also grew beans and a lot of different kinds of vegetables and fruit. 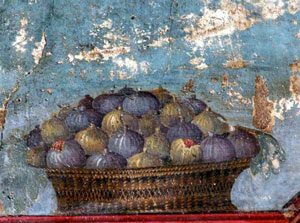 Some foods that were especially common were apples and pears and figs and plums (and prunes, which are dried plums) and raisins (made from the grapes), green peas (mostly dried like for split-pea soup), lentils, and chickpeas, onions, garlic, and cabbages, honey(they didn’t have sugar), herbs like parsley, dill, thyme, oregano, basil, cilantro, and mint, nuts, especially walnuts and chestnuts and acorns, cucumbers (they didn’t have tomatoes), eggs (from chickens and from geese and ducks), yogurt and cheese, mostly from goats and sheep.

People ate mutton (sheep meat), goat meat, and pork and ham and bacon, chicken, goose and duck, and fish, especially tuna. Oh, and snails – people raised snails in special snail gardens, with little box hedges for them to crawl on.

One item that was very popular was a fermented fish sauce called garum: you can find something like it today in the Thai foods section of the grocery store. Or Worchestershire sauce is probably similar too. Roman people used garum on everything, the way a lot of people use ketchup today.

Some things you might make to see how these Romans ate:

pizza crust with olive oil poured on it, with feta cheese, thyme, onions and/or garlic, baked (remember, no tomatoes!)

yogurt mixed with chopped cucumbers
and garlic (tsatsiki)
cucumbers with oil and vinegar (actually, the Romans ate them with honey)

yogurt mixed with honey and walnuts
roasted chestnuts
apple tart, made with honey

But things didn’t stay entirely the same throughout the whole thousand years of the Roman Empire. By 300 AD people were beginning to grow oranges for themselves in Italy.

Spend the Day in Ancient Rome: Projects and Activities that Bring the Past to Life, Ages 8-12 by Linda Honan (1998). With recipes for a whole Roman feast, for kids.

Food and Society in Classical Antiquity, by Peter Garnsey (1999). Garnsey has written a lot about ancient food, and is an expert, but he writes very clearly.