History of beer – Where does beer come from?

History of beer: Sumerians sipping beer through straws (ca. 2500 BC)

When did people start to make beer?

Even before people began farming in China, West Asia and Egypt, they were already using wild grain that they gathered to make beer. When they did begin farming, around 6,000 BC, they made even more beer.

How did they make beer?

You make beer out of barley, which is a grain like wheat. You add yeast (like for making bread) to the barley, and water, and you let it sit, and it turns into beer in a few weeks. Or you can just mix barley and water and let it sit, and the natural yeast in the air will turn it into beer.

What’s the history of barley?
How do yeast make alcohol? 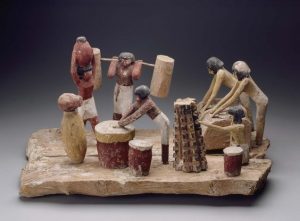 Why did people make beer?

There are a lot of advantages to turning barley into beer. For one thing, you don’t have to worry about beer going bad, or getting wet, or mice eating it, anymore. Beer will keep a long time and still be good.

For another thing, you don’t have to cook beer. It takes fuel to make porridge or bread, but beer is a convenience food. But it still has the nutritional value of barley – mainly carbohydrates.

Why are carbohydrates important?

Also, people enjoy drinking beer because the alcohol in it gets them tipsy! But people made fun of anyone who drank so much that he or she got really drunk.

Did children drink beer then?

Most children in the United States today don’t drink beer, but in antiquity and the Middle Ages children did drink beer.

Was ancient beer different from our beer?

Yes, Egyptian and West Asian beer was different from today’s beer. It wasn’t fizzy, and it was much thicker, almost like soup. People often drank it through straws.

Yes! Pretty soon, people in other parts of Africa like Nubia (modern Sudan) and East Africa (modern Kenya) also learned how to make beer, though sometimes from millet instead of barley.

Why did they use millet instead of barley? 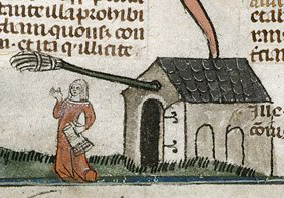 History of beer: Alewife shows her tankard outside her tavern. The Smithfield Decretals (France, ca. 1200 AD) Now in the British Library

In southern Europe, people mostly drank wine rather than beer. But in northern Europe, it’s too cold to grow wine grapes (or it was in antiquity). Roman soldiers from the southern Mediterranean showed the Germans how to brew beer.
So there, too, in Germany and Scandinavia and England, people drank beer or ale (a kind of beer). Like the Egyptians, Europeans mostly made beer out of barley. In medieval England, beer and ale were mostly made by women known as brewsters and alewives.

More about women in medieval Europe

When did people start to add hops to beer?

Sometime around 800 AD, people in the Carolingian Empire figured out that if you added hops (another kind of plant) to beer, you could make it keep longer. Mostly people didn’t do this at first, because it made the beer taste bitter (the way beer tastes today) instead of sweet and fruity. Most people didn’t like beer with hops in it. But they gradually got to like it. By the 1200s AD most people in Germany drank beer made with hops, and by the late 1400s some people in England drank beer made with hops too.

When did beer start to be fizzy?

Ancient and medieval beer was a tiny bit fizzy, because the yeast in the beer pooped out carbon dioxide, and that formed little bubbles in the beer. But most of the carbon dioxide would just rise out of the beer into the air. So beer didn’t really get fizzy until the 1800s, when brewers figured out how to make bottles that could hold the pressure of carbonated beer. In the late 1800s, beer got even fizzier when brewers figured out how to force extra carbon dioxide into the bottles.

Learn by doing: mix flour and water and yeast, and let it sit on the counter. What happens?
More about wine

Bibliography and further reading about the history of beer:

Spend the Day in Ancient Egypt : Projects and Activities That Bring the Past to Life, by Linda Honan (1999).

A History of Beer and Brewing, by I. Hornsey (2004). Entertaining, but also a lot of good information.

Ale, Beer, and Brewsters in England: Women’s Work in a Changing World, by Judith Bennett (1999). Why women brewed the beer in medieval England, and why they stopped doing it.

Or check out this article on beer in theEncyclopedia Britannica.