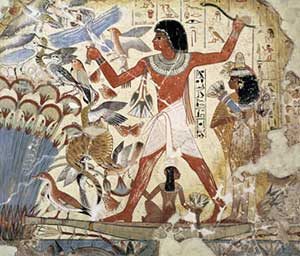 During most of the Stone Age, people in Egypt, like people everywhere else in the world, lived by hunting and gathering their food. They traveled around from place to place in the Nile Valley, harvesting wild grasses and digging up roots. People picked berries, and found bird eggs. They fished in the Nile River and they gathered reeds from its shores to make baskets. They hunted wild cattle and turtles.

By around 10000 BC, Egypt had gotten crowded enough so that people were forced to begin growing their own food instead of only hunting and gathering it.

About the same time, people also started farming in West Asia. Probably people have always known how to grow plants from seeds. They liked to just go out and pick wild food, because that was easier. But when there got to be enough people, the wild food didn’t grow enough to feed everyone. People had to begin planting their own as well. People also began to keep tame cows, sheep, and pigs that they probably bought from their West Asian neighbors. Today we call this the Agricultural Revolution.

But farming brought many other changes too. Once people were planting crops, they had to defend the land where their crops were. If strangers came by, they couldn’t just leave. There was more fighting. Soon people began to band together into larger communities that could fight better. They chose leaders. And those leaders, seeing the advantages that farming brought them, forced more and more people to start farming and settle down under their leadership.

Around 3500 BC, people in Egypt got domesticated donkeys from their neighbors further south in Sudan. Traders used these donkeys to carry ivory and gold and basalt and obsidian north into Egypt, and to carry Egyptian things like linen cloth south to Sudan and Kenya. That made both places richer than they were before. Together, the trade and the farming helped to start the Old Kingdom.

Learn by doing: go pet a donkey in a petting zoo
Go on to the Old Kingdom
Mesopotamia
Stone Age Africa
Quatr.us home