What is an aurochs? Central Asian Environment 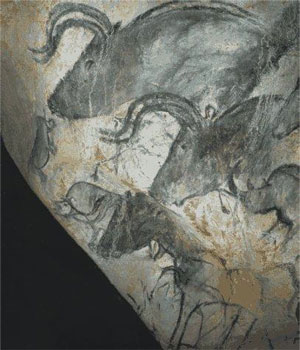 When did the aurochs evolve?

Around fifty million years ago, after the dinosaurs died, large mammals started to evolve from smaller mammals that came earlier. Because grass had evolved only recently, about 100 million years ago, there weren’t yet very many animals that ate grass, so some of these larger mammals evolved to eat grass.

One of these large grass-eating mammals was the ancestor of the cow, the aurochs (ORR-ox). (The word comes from the German Ur-ox, meaning Early Ox.)

Where were the first aurochs?

The earliest aurochs lived in India about two million years ago. They looked pretty much like modern cows and bulls, only bigger. This was about the same time that the earliest human-like people were evolving in Africa.

The Tertiary Period
Evolution of primates

Ice Age and the spread of aurochs

When the aurochs first got to Africa, they met people for the first time. People soon learned that aurochs were good to eat, and ate them when they could get them, though most of the time hunting aurochs was too dangerous.

By about 5000 BC, people had a new way to get aurochs meat: they caught young auroch calves and tamed them. People living in Central Asia, North Africa, and India all independently worked out ways to domesticate, or tame, the aurochs. At first, people kept cows just for meat and leather, but soon they learned to milk their cows and make cheese too. 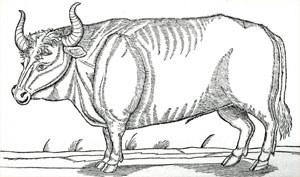 A drawing of one of the last surviving aurochs, in the 1500s AD

This cooperation between people and aurochs had its advantages and disadvantages for the aurochs. People helped them survive, and by the end of the Bronze Age there were many more cows than there had been in the Stone Age. But there were fewer and fewer wild aurochs.

By the Middle Ages nearly all of the wild aurochs in the world had died off. People were living and herding domestic cows in most of the land that aurochs had once lived in. Even though the king of Poland tried hard to save the last few aurochs, the last aurochs died in 1627 AD, and the aurochs became extinct.

Bibliography and further reading about the aurochs: