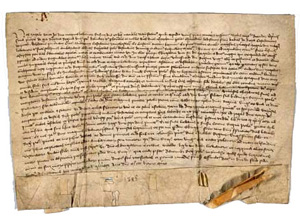 Queen Jadwiga was only ten years old in 1384. But her mother Elizabeth sent her north from Hungary to become the Queen of Poland. Elizabeth stayed behind to rule Hungary. She was regent for Jadwiga’s older sister.

More about Elizabeth of Hungary

Poland and Lithuania join into an empire

By 1385, when she was twelve, Queen Jadwiga married Jogaila, the Duke of Lithuania. That united Poland and Lithuania to form a bigger empire. Now they could defend themselves against the Holy Roman Empire to their west and Russia to their east.

So from 1385 AD on, Poland and Lithuania were united in one empire. Duke Jogaila converted to Christianity. He took a new Polish name. Now people called him King Wladyslaw II. Wladyslaw and Jadwiga’s empire was big. It covered not only modern Poland and Lithuania, but also a lot of what is now Belarus and Ukraine. 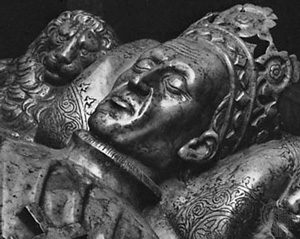 This empire was big enough to defend itself successfully. Wladyslaw fought off Mongol invasions from the east and German invasions from the west. Jadwiga died of infection after childbirth in 1399. She was only 25 years old. So she never really got to be a powerful queen. But her husband, King Wladyslaw II, ruled for an extremely long time – 48 years! That gave him time to really lock Poland and Lithuania together as one empire.

Who were the Mongols?
What’s going on in the Holy Roman Empire?

Even though Wladyslaw ruled forever, it took a long time for him to have sons. When Wladyslaw II died in 1434, his oldest son Wladyslaw III was only ten years old. So Wladyslaw III’s mother Sophia ruled Poland as regent. After Wladyslaw III died, Sophia kept ruling with his younger brother Casimir IV.

Sophia died in 1461, and then Casimir ruled alone. Sophia and Casimir did a great job and made Poland much richer and more powerful. In 1478, Czar Ivan the Great of Russia took over a lot of Lithuania. But Casimir took over Bohemia and Hungary.  So the Polish kings ruled over pretty much all of eastern and central Europe when Casimir died in 1492.

What made Ivan so great?

Casimir’s son Alexander only ruled a few years, and never had much power. His younger brother Sigismund was more successful. But in 1526, Suleiman’s Ottoman Empire attacked Hungary. Suleiman won a big battle there. Louis II, the king of Hungary and Bohemia, was killed in the battle. So the Ottomans took over the eastern half of Hungary. And the Austrians took over the western half. That started the Austro-Hungarian Empire. Poland became smaller and weaker, but it was still there.