Sometimes people describe China’s landscape as being like a staircase with three steps. The top step of this Chinese environment staircase is in the west, where the Himalaya mountains are (India is on the other side of these mountains).

Tibet is in this part of China. People call it “the roof of the world.” The tops of the mountains have snow even in the summertime. In winter, the whole area is very cold – it can be as cold as -40 Fahrenheit (that’s the same in Celsius). But in the summer it can get hot, up to about 100 degrees Fahrenheit (40 degrees Celsius). Panda bears live mostly in the mountains of south-western China.

Why do we have seasons?
Measuring temperature 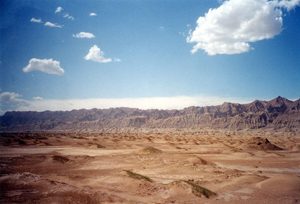 Then in the middle of China is the second step of the staircase. There are still hills, but they are lower and not snowy anymore. Actually, most of this middle part of China is deserts. The most famous is the Gobi Desert.

Some of it is grassland where you can graze cattle (mostly yaks) but you can’t farm. Mongolia is in this part of China. Here, too, it gets very cold in the winter and hot in the summer. 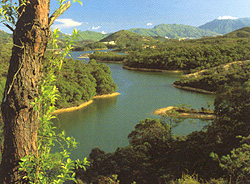 Most of the people of China live around here, where they can get plenty of water for farming. In the northern part, people mostly grow wheat and millet, and in the southern part, they mostly grow rice.

Where is rice from?
Where is millet from?

In this part of China, which people who live there call the Middle Kingdom, it doesn’t get as hot or as cold. But in the spring, when the snow melts in the mountains, these rivers often flood. Northeastern China has lots of forests and in the forests there are deer and even reindeer, and tigers.

In the very southernmost part of China, there’s one more kind of climate, which is almost a tropical rainforest or jungle. It’s hot and wet there in the summer, and sometimes there are typhoons (tie-FOONS), tropical storms like hurricanes.

What is a typhoon?
Where are chickens from?
More about Chinese medicine

Even in winter, it never really gets cold. Ginseng, a plant people used for medicine, grows here. There are elephants, wild chickens, leopards, and all sorts of other jungle animals.

Bibliography and further reading about the Chinese environment: