Chicken history – Where are chickens from? India and China 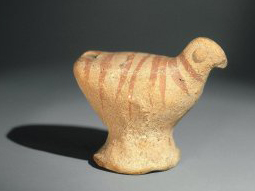 Where are chickens from?

Recent genetic evidence shows that people tamed chickens in two different places: in China and in India. Probably the people in each place didn’t know that the other ones were also taming chickens. By about 5000 BC, people in China were certainly keeping chickens, and by 3000 BC people in India and probably Vietnam also had domesticated chickens.

Chickens and their eggs

People ate the chickens and they also ate their eggs. Chickens were easy to keep, and small enough to eat in one meal, so you didn’t have to worry about the meat going bad. And you could eat their eggs as well. Both the meat and the eggs are good sources of protein.

Evolution of eggs
Eggs and cooking
A project with eggs
Why do we need protein? 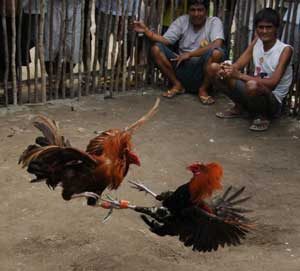 Chicken history: Cockfighting in the Philippines

Chickens slowly spread from India to West Asia, but they were still exotic specialty items. In West Asia and Egypt, the main reason for keeping chickens may have been not for food but for the popular sport of cock-fighting.

You take two roosters and put them in a cage or pit together and they will fight over the territory. People place bets on which rooster will win. Often the loser dies in the fight. (Today, cock-fighting is illegal in most places, because it’s cruel.) 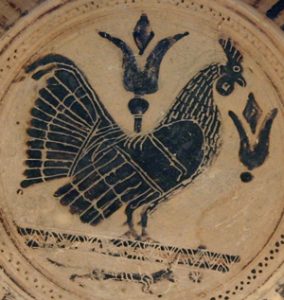 In West Asia, people didn’t really keep chickens for their eggs and meat until some time after 1000 BC, in the Iron Age. To the Persians, the rooster crowing at dawn heralded the return of light conquering darkness. (This lends a new meaning to Peter’s betrayal of Jesus “before the cock crows.”)

More about Zoroastrianism
And the Persians
Who was the apostle Peter?

When chickens finally reached Europe, sometime between 1000 and 550 BC, they and their eggs were an exciting new food; Greeks sometimes called chickens “the Persian bird.” Greeks and Romans often sacrificed chickens to their gods. Socrates, for example, asked his friends to sacrifice a cock to the god Asclepius for him as he was dying just after 400 BC. But even then, Greeks may have been using chickens more for cockfighting than for eating.

What is animal sacrifice?
Who is Socrates?

In Egypt, chickens became a staple food even later, about 300 BC. Farmers in both Egypt and China worked out ways to incubate chicken eggs in warm clay ovens, so that they didn’t need to have hens sit on their eggs to hatch them, and instead the hens could lay more eggs. Did they get the idea from their beehives and honey farms? This factory system made chicken eggs cheaper, and more people began to eat them.

Chicken in Africa and the Americas

After 300 BC, chickens slowly made their way south and west across Africa, reaching South Africa either from Egypt or through the work of Indian traders along the coast of East Africa, probably around 500 AD. There were chickens in West Africa by 1000 AD, and then Spanish settlers brought them to the Americas in the late 1400s.

Did you find out what you wanted to know about chicken history? Let us know in the comments!

Learn by Doing – Cook some eggs!
More about eggs
History of Turkeys

Bibliography and further reading about the history of chickens: