End of the Peloponnesian War 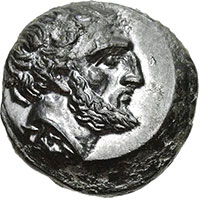 The end of the Peloponnesian War: Tissaphernes, the Persian satrap

The Spartans defeated the Sicilian Expedition in 415 BC. Plus, now they had the help of the Athenian general Alcibiades, who had gone over to the Spartan side. Alcibiades taught the Spartans how to fight naval battles.So the Spartans started to win more battles against Athens. But by 412 BC Alcibiades had gotten very unpopular in Sparta as well as Athens. Plutarch says Alcibiades was suspected of sleeping with the Spartan queen, but we don’t know whether that is true. 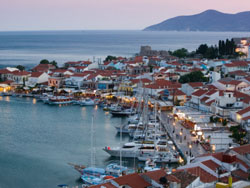 The harbor of the island of Samos

The Athenian navy at Samos

At this point, most of the Athenian navy was anchored off the island of Samos. But now the navy heard about the oligarchs getting power in Athens, and wanting to surrender to Sparta. The soldiers were very angry about losing their democracy, and about surrendering. They elected Alcibiades their general. And they demanded that the Athenians put the democracy back in power immediately.

Democracy comes back to Athens

The Athenians were going to say no, but just at this point the negotiations to surrender to Sparta failed. The Spartans attacked and the Athenian fleet in Athens was destroyed. The only Athenian ships that were left were at Samos. So the Athenians agreed to do what the fleet at Samos wanted. They restored the democracy, let Alcibiades be their general, and stopped trying to surrender to Sparta. The Persians switched sides and started to give money to Sparta instead of Athens.

The Spartans starve the Athenians

Now the Spartans had a smart idea: they used their navy to block the Hellespont. No more ships could sail through to bring food to Athens. Alcibiades tried to break the Spartan blockade, and he did win some victories. But in the end, thanks to Persian money, the Spartans got control. The Athenians started to fight among themselves, and by 407 BC they had fired Alcibiades again. He was angry, washed his hands of the whole war, and retired.

The Athenians surrender: end of the Peloponnesian War

Did you find out what you wanted to know about the end of the Peloponnesian War? Let us know in the comments!

Learn by doing: hold a debate between Spartans and Athenians about terms of surrender
More about the Hellenistic period

The Last of the Wine

The Peloponnesian War 421-404 BC, by Philip De Souza (2002). A more liberal view, with emphasis on the role played by the Persians, and less on the strategies of individual battles.

The Landmark Thucydides: A Comprehensive Guide to the Peloponnesian War,
by Thucydides, with commentary by Robert B. Strassler (1998). The original account of the war by an Athenian general turned historian.