What is oligarchy? Rule of the few 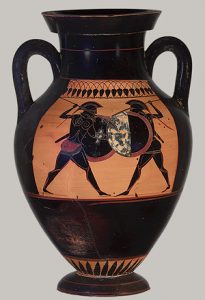 Aristocrats fighting on an Athenian vase from the 500s BC

Oligarchy means the rule of the few, and those few are generally the people who are richer and more powerful than the others, what you might call the aristocrats or the nobles.

These are not always men: just as monarchies have both kings and queens, women sometimes appear in councils of aristocrats, and even when they are not members, they are often there telling their husbands or their sons what to do.

What is a monarchy?

So oligarchies are generally bad for the poor, but they are pretty good for women, at least for rich women from powerful families.

How does oligarchic government work?

Usually the way an oligarchy works is that there is a group of people who are in charge, somehow. Sometimes they may be elected, and sometimes they are born into their position, and at other times you might have to have a certain amount of money or land in order to be in the council.

The history of money

Need a Halloween costume? Show you love history and go as a Roman soldier! Or click here for many more cool costumes!

Then this group of people meets every so often – every week or every month – to decide important questions, and to appoint somebody to deal with things. Like they might decide that it should be illegal to steal, and then they would appoint one of the nobles to be a judge, and decide if people were guilty of stealing, and decide what to do with them if they were.

When and where did people have oligarchies?

Oligarchies were not as common as monarchies in the ancient world. Right after the Dark Ages, most of the city-states in Greece were oligarchies, between about 1000 and about 500 BC. Athens was an oligarchy, and so were Thebes and Corinth. The Etruscans were also oligarchic. The Roman Republic, which started around 500 BC, was in some ways an oligarchy too. All of these systems effectively prevented women from getting political power.

Life in Archaic Athens
What was Thebes like?
How about Corinth?
Read about the Etruscans
And the Roman Republic

In the Middle Ages, after the death of Matilda of Canossa, the cities of northern Italy became independent. They had to develop their own systems of government. Some of them – Genoa, Florence, Venice – were ruled by groups of rich people. Some were more like democracies, but others were more oligarchic. Like the ancient oligarchies, these medieval ones were mostly run by men, even though before the oligarchies, Italy had been under the control of a woman. Outside of Europe, oligarchies have always been rare – and women have often had more power because of it.

One weakness of an oligarchy is that the men involved are always competing with each other to see who can get more power. Often one of these men figures out that if he gets the poor people on his side – which is the same thing as getting control of the army – he can use the army to defeat his rivals and get all the power for himself. He promises the poor people that he will forgive debts and redistribute land if they support him. If that works, then what you have is a tyranny.

Why do people fall into debt?
More about tyranny

Learn by doing: Some people call the United States an oligarchy today, and others say it’s a democracy. What do you think? Is the U.S. an oligarchy?

Bibliography and further reading about oligarchy: