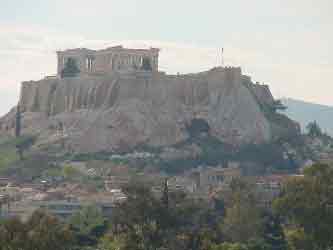 Archaic Athens: The Acropolis of Athens

Athens in the Late Bronze Age

Athens was a city-state in the center of Greece. People moved there because it has a good seaport nearby (at Piraeus) and a steep hill that makes Athens easy to defend.

Athens was already an important city in the Late Bronze Age, and appears in Homer‘s Iliad as the kingdom of Theseus.

Who was Theseus?
What is a city-state?

Athens in the Greek Dark Ages

There was almost certainly a Mycenaean palace on the Acropolis, and lots of Mycenaean pottery has been found in Athens.

The Mycenaeans
Mycenaean palaces
Their art
And their pottery

During the Dark Ages, Athens got smaller like other Mediterranean towns. The old palace was abandoned. But the Athenians were proud to say that unlike Sparta or Corinth, Athens had never been sacked by invaders.

Athens in the Archaic period

In the early Archaic period, around 900 BC, Athens began to grow again. They didn’t choose a new king. Instead they chose an oligarchic government. A group of rich men (but not women) got together to make the laws and decide everything.

Read more about oligarchy
What is the Archaic period? 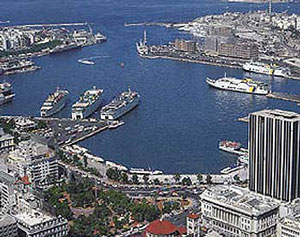 During the Archaic period, the system of government seems to have been pretty hard on ordinary people, and to have favored rich men and women.

Draco writes down the laws

In 621 BC a man named Draco was serving in the government of Athens as an archon. Draco was a rich man, part of the oligarchy. He ordered his slaves to write down the laws, so that everybody would know what the laws were and the rich men in the oligarchy wouldn’t be able to just make up laws to suit themselves.

But most people in Athens weren’t happy when they saw the laws written down – they were angry! They thought these laws weren’t fair. They complained especially about debt bondage – being sold into slavery because you owed somebody money. We still say that laws that are too tough to be fair are draconian.

So in 594 BC the Athenian oligarchy chose another rich man, Solon, to fix the government. They told him, “Do something so everyone won’t be so mad at us, but let us keep all the power.” (We know about Draco and Solon mainly from the Greek historian Herodotus).

The Athenian Assembly gets started

Under Solon’s rules, the rich men in the oligarchy kept most of their land and most of their power. But he did start an Assembly, so that any citizen could come and vote on important questions. And Solon decided that judges would be chosen through a lottery, so that even poor men might be judges.

Solon did not allow women to be in the Assembly or to be judges.

Solon did make it illegal for parents to abuse their children. For a while, this worked. The ordinary people weren’t so angry, and the rich men got to stay in power. But then some of the rich men found a way to get more power for themselves – the tyranny.

Learn by doing: find Athens, Sparta, Corinth and Thebes on a map
More about Athens under the Tyrants

More about Athens under the Tyrants
Ancient Greece
Quatr.us home