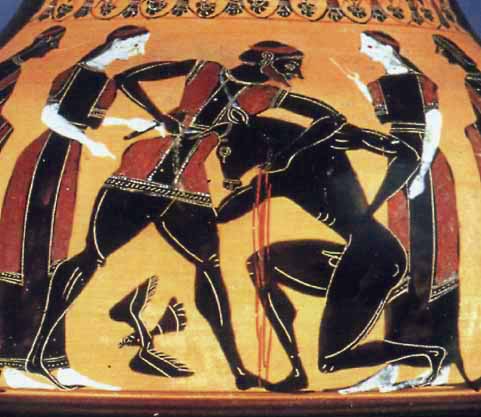 Theseus and the Minotaur – Athenian black-figure vase, ca. 550 BC

According to the Greek story, Prince Theseus was the son of King Aegeus of Athens, not too long before the Trojan War (so maybe around 1300 BC). At this time the Minoans, who lived on the island of Crete, had a very strong navy. The Minoan king, King Minos, used to send his navy to attack Greek cities, including Athens. Everyone was afraid of King Minos and his soldiers.

Bronze Age Athens
The Trojan War
Who were the Minoans?
More Greek myths
All our ancient Greece articles

King Aegeus had an agreement with King Minos that if Minos would leave Athens alone, Aegeus would send seven Athenian boys and seven Athenian girls to Crete every nine years, to be eaten by a monster that lived on Crete, the Minotaur. The Athenians had been doing this for a long time, but of course the boys and girls who had to go be eaten and their moms and dads hated it!

Where did the Minotaur come from? 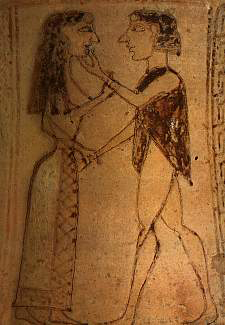 One day it was once again time to send the children to Crete. Everyone was crying. Prince Theseus said that he was going to go with them and kill the Minotaur, to save these children and all the ones who might be sent in the future. His dad, King Aegeus, begged him not to go. Aegeus was afraid that the Minotaur would get Theseus too! But Theseus said he was, too, going to go, and he got on the boat.

The boat had a black sail, to show how sad everyone was. King Aegeus made Theseus promise to change to a white sail if he lived to come home, to announce that he had won, and Theseus promised.

Ships and sailing in ancient Greece

When the Athenians got to Crete, King Minos and his daughter Princess Ariadne (arr-ee-AD-nee) came out of their palace to see Theseus and the other Athenian children. King Minos just said to throw them in to the Minotaur the next day, but Ariadne fell in love with Theseus (yes, just like that!) and she wanted to help him. 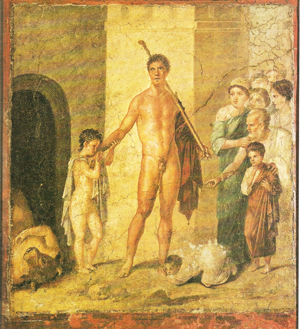 Theseus after he kills the Minotaur (Pompeii, ca. 79 AD)

So late that night Ariadne gave Theseus a sword and a ball of string. She told him to tie the string to the door of the Labyrinth where the Minotaur lived (a big maze) and unroll it behind him as he went so he could find his way back out, and to use the sword to kill the Minotaur. Theseus thanked Ariadne very much and promised to marry her if he escaped without being eaten by the Minotaur.

History of spinning
Bronze swords
What is the Labyrinth?

Princess Ariadne opened the door and let them out, and they all ran away to their ship and sailed away: Theseus, Ariadne, and all the other Athenians.

Did you find out what you wanted to know about Theseus and the Minotaur? Let us know in the comments!

Bibliography and further reading about Theseus,

Theseus and Athens, by Henry J. Walker (1995). An analysis of the Theseus myth in Athens by a specialist, for specialists.