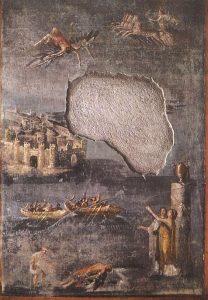 Daedalus and Icarus: Icarus falling (on a wall painting from Pompeii,about 79 AD)

Once upon a time on the island of Crete, maybe about 1325 BC, there was a king whose name was Minos (in the story; this is only a story). He had living in his palace at Knossos a great architect and inventor named Daedalus.

The Labyrinth on Crete

There are stories about Daedalus inventing all kinds of things, but he is especially supposed to have built the great Labyrinth for King Minos to keep the Minotaur in.

After Daedalus built the Labyrinth, though, King Minos did not want him to be able to tell its secrets to anybody else, and so he kept Daedalus a prisoner in a tall tower, all alone with only his young son Icarus.

Now Daedalus and Icarus did not like being prisoners, and so Daedalus began to think about how they could get away. He watched the birds flying and he thought how free they were, and he decided to make wings for himself and Icarus.

Daedalus and Icarus made the wings out of bird feathers and wax and they tied the wings on to each other.

History of beeswax
A project with feathers

Daedalus warned his son to be careful when he was flying: if he went too close to the sea, he might fall in, but if he flew too high in the sky, the heat of the sun would melt the wax on his wings and he would fall. Icarus promised to be careful.

The death of Icarus

So they set off for freedom. At first everything went well, but after a little while Icarus got tired of just flying in a straight line. He began to try to do tricks and go up and down. His father told him to cut it out and behave himself.

But Icarus was having too much fun to listen. He kept on going up, higher and higher. Suddenly he realized his wings really WERE melting! He tried to go back down again, but it was too late. His wings came apart, and he fell down, down, down into the ocean, where he drowned.

Daedalus grieves for his son

Daedalus was horrified that his son had died, and spent a long time searching for his body, but when he found it there was nothing he could do but bury it sadly.

The Greek god Apollo
Phaethon’s story
Arachne and Athena
Niobe and her children
What is hubris?

Apollo is the god of moderation in all things, so it’s appropriate that his power (the sun) killed Icarus, who refused to take the middle way. Like the story of Phaethon, this is another story about hubris – thinking you are too good for ordinary people’s rules. For more stories about hubris, check out Arachne and Niobe.

Learn by doing: a project with feathers
More stories about Crete (The Minotaur)

Bibliography and further reading about Daedalus:

Daedalus and the Minotaur, by Priscilla Galloway. A 1990s retelling that deals with the Minotaur sympathetically as a disabled person, rather than just a monster.

Daedalus and Icarus, by Geraldine McCaughrean and Tony Ross (Illustrator). Unfortunately out of print, for now. .

D’aulaire’s Book of Greek Myths, by Edgar and Ingri D’Aulaire. (Look under Theseus).