Phaethon and the Chariot of the Sun – Greek myth 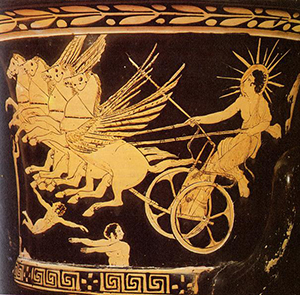 Phaethon was a little boy who lived alone with his mother. He started going to school, and the other children teased him because he didn’t have any father. So when he got home he asked his mother, “Mom, who is my father?” At first his mother didn’t want to tell him, but then she said, “Your father is the sun god, Helios. He lives up in the sky and drives the chariot of the sun.” Phaethon was like, “Really? Cool ! Wow, wait till I tell the other kids!”

But when Phaethon told them, the other kids made fun of him. “Yeah, right,” they said. “You just don’t know who your dad is and you’re making this up. You expect us to believe your dad is a god? How likely is that?”

Phaethon sulked for a while and then he decided to show those mean kids what was what. He took a little food in a leather bag and he walked and he walked and he walked until he got to the end of the earth and he found where the gods were and got to Helios. He said, “Lord Helios, are you really my dad?” And Helios said, “Yes, I am.” Phaethon said “Well if you are really my dad then let me drive the chariot of the sun one time. That will show everyone at school and they’ll stop making fun of me.”

Well, Helios really didn’t want to do that. Phaethon was only a little boy, and he was only half a god, and he certainly wasn’t strong enough to handle those wild horses of the chariot of the sun! But Phaethon begged and cried and sulked and teased and after a long time Helios gave in and said “Okay, you can drive them, but just this once. And you must be very very careful.” Phaethon promised to be very careful. He was very happy that he was going to get to prove that he was really Helios’ son.

So Helios showed him how to do it, and Phaethon got up on the chariot and took the reins of the horses and off they went. At first it went fine, and Phaethon waved at all his friends down on the ground and was very pleased with himself.

But then the horses, feeling that it was only a little boy holding the reins, began to run away! Phaethon could not hold them back, though he pulled as hard as he could pull. The horses went too far up into the sky, so that the sun was too far from the earth. It got dark, and cold, and plants began to die. Everyone was very scared.

Here’s a video of Phaethon’s story

Then the horses went the other way, too close to the earth. That was even worse! It got too hot everywhere, and everything began to burn up. Finally Helios, who had been watching in horror, went to Zeus and said, “Lord Zeus, I made a mistake. I let my little boy Phaethon drive the chariot of the sun, and he is too little. Now the whole earth is going to burn up. Please throw a thunderbolt at him and knock him out of the chariot before things get any worse.” He said this, even though he loved his little boy and didn’t want to hurt him, but he had to.
So Zeus knocked Phaethon out of the chariot, and he fell to earth and died. But Helios was able to catch the horses then, and made the sun go back in its usual way.

Learn by doing: observe plants that are too cold or too hot. What do they do?
More about the god Apollo

Bibliography and further reading about the story of Phaethon:

Euripides: Phaethon, edited by James Diggle and others (2004). The main ancient source for the story is a fragmentary play by Euripides; this is a discussion of that play, with commentary on the myth, by specialists for specialists.