When did people start riding horses? 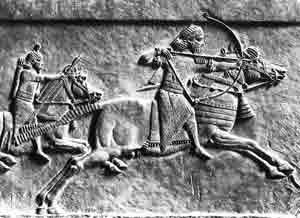 Near the beginning of the Iron Age, about 800 BC, people in Central Asia began riding horses more instead of just having them pull wagons.

Where are horses from?
Iron Age timeline
All our Central Asia articles

Why did people ride horses?

Once some people were riding horses, everybody wanted to do it. On horseback, you could go much faster than anybody had ever gone before. Riding horses was a lot of fun, but also you could carry messages much faster.

Riding horses was much safer than walking places; you could escape from attackers if you had a horse (and they didn’t). If you could ride and fight at the same time, you had a strong cavalry that could win battles.

What is cavalry?
Zhou Dynasty in China
Assyrians in West Asia
The Zhou and the Assyrians

Very soon horse-riding spread from Central Asia all across the rest of Asia, Europe, and North Africa.

Did farmers plow with horses? 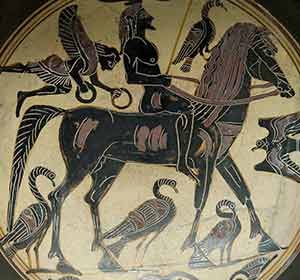 Farmers didn’t usually use horses for plowing in the ancient world (they usually used oxen instead, or simply turned over the soil by hand).

What is plowing?
Where are oxen from?

Horses were too expensive, and they needed better quality food than oxen. Also, no good harness arrangement for horses was invented until about 200 BC, when somebody in China figured it out.

Persian women on horses ca. 500 BC

Women began to ride horses almost as soon as men, as shown in this Persian carving from 500 BC. Like men, they also fought from horseback as cavalry, at least in Central Asia.

Horses and the Silk Road

People were riding horses in China, further east, by the 300s BC (according to David Graff). The rise of the Silk Road about this time allowed Central Asian horse breeders to sell many more horses to China and to the Hellenistic world, and horses may have become more common as a result. Horses continued to be popular both to pull wagons and to ride, all across Asia and Europe throughout antiquity and the Middle Ages. 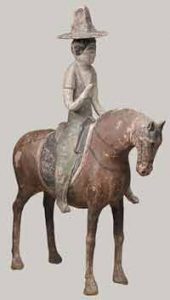 From horses to camels

The invention of better camel saddles about 500 AD encouraged people to switch from horses to camels.

Where are camels from?
Who are the Turks?
And the Mongols?

But then the great medieval victories of Central Asian cavalry, first of the Turks and then of the Mongols, between 800 and 1300, made horses popular again.

Learn by doing: a bicycle race
Native Americans get horses

Eyewitness: Horse, by Juliet Clutton-Brock (2000). For kids, with lots of pictures.

The Horse in the Ancient World, by Ann Hyland (2003). Mostly Greece and Rome.

Imperial China: The Art of the Horse in Chinese History, by Bill Cooke (2000). This is the catalogue of an art exhibit, so it has lovely pictures of everything to do with horses in imperial China. It has a lot of information about the history of horses in China, too.