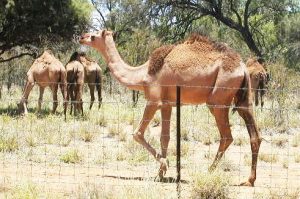 History of camels: A group of camels

What about horses?
How about donkeys?
Evolution of mammals

Other camels moved south to South America, where they became llamas and vicunas and alpacas. Then camels became extinct in North America, maybe during the Ice Age. But they survived in Asia and Africa.

What are llamas?
All our South America articles

History of camels: Camels started out in North America and spread to Asia and South America from there.

People in Central Asia were the first people to domesticate (tame) camels. They tamed camels long after they learned to tame cows and pigs, maybe about the same time as horses (about 3000 BC). Like horses, camels are not as tame and stupid as cows and sheep are.

By the time of the Islamic Empire, there were almost no wild camels (and there still aren’t), but people used tame camels all across Africa and Asia, from China to North Africa. 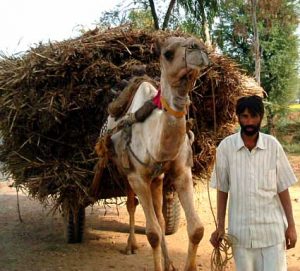 This camel is from India.

Camels can travel long distances across the desert without needing water, so they were very useful in the Gobi Desert in Asia and in the Sahara Desert in Africa.

Trade with Chad
And with Mali
More about the Silk Road

History of camels: the pack saddle

But it took a long time to figure out a good pack saddle for camels, so they could carry heavy loads. Because of not having good pack saddles, the Persians, the Greeks, and the Romans used donkeys more than camels even in the desert. (For instance, when Jesus entered Jerusalem, he rode on a donkey).

But around the beginning of the Islamic empire, maybe about 500 AD, somebody in West Asia invented a good pack saddle for camels. After that, people began to use camels as pack animals more and more.

In Africa, beginning around 1000 AD, camels made it much easier to cross the Sahara desert, so people could trade between West Africa and North Africa. This started great trade routes which traders still use today.

What is the Sahara Desert? 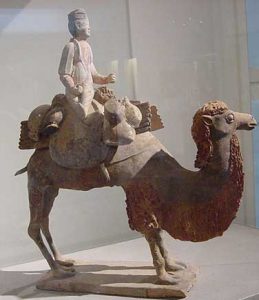 Around the same time, people in India also began to use camels more, along with the Islamic invasions of India.

And people in China also began to use camel saddles. This statuette (small statue) of a man riding a camel is from T’ang Dynasty China, about 800-900 AD.

Did you find out what you wanted to know about the history of camels? Let us know in the comments!

More about llamas, which are related to camels

Bibliography and further reading about camels:

The Camel and the Wheel, by Richard Bulliet (1975). Bulliet lays out some reasons why camels became more popular around the time that the Islamic Empire was strongest – mainly the invention of a better camel saddle.