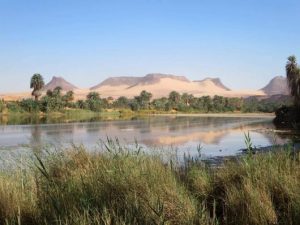 The Bornu empire – ruled by Muslims – controlled most of Chad at the end of the Middle Ages, with their capital at Ngazargamu in eastern Nigeria. The Bornu controlled a large area sometimes as far north as southern Libya and sometimes considerably west of Lake Chad, into Niger and Nigeria. There were two smaller kingdoms further east, Baguirmi and Ouaddai; Baguirmi, in the middle, was an Islamic state, sometimes taken over by the Bornu, and sometimes by Ouaddai. The Ouaddai were cousins of the people of Darfur, their neighbors in western Sudan. They were traditional believers, not Muslims. At times, the Bornu also controlled the Ouaddai, right up to the borders of Darfur in Sudan.

These northern states couldn’t take over the land further south, because it was heavily forested and tsetse flies lived there and carried serious sicknesses for both people and horses. So the cavalry couldn’t go there.

The Kanem-Bornu were less powerful in the 1700s.

In 1808, Fulani rulers took control of the Kanem-Bornu capital in Nigeria, and the kingdom fell apart.

But gradually most of Chad fell under the control of French colonialists. In 1893, the sultan of Baguirmi got the French to protect them from the Ouaddai.