Native Americans get horses and donkeys 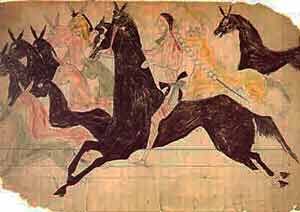 There had been no horses in North America since about 5600 BC, when buffalos ate their grass and then Native Americans (probably) hunted them (and camels) to extinction. But just after 1500 AD, horses returned when Spanish explorers brought them to North America and South America. Nobody in North or South America had ever seen a horse before, and they were very excited and interested. At first the horses gave the Spanish men a huge military advantage, and let them conquer the Pueblo and Aztec people who would otherwise have been too strong for them.

The Pueblo people were determined to get horses for themselves. Their successful revolt in 1680 gave them control of many captured Spanish horses. The Pueblo, together with the Comanche, began to do a thriving business in selling their captured horses to other Native American people from the Cheyenne to the Sioux. The Comanche in particular became excellent riders, who could shoot bows and arrows or guns from horseback. Horses helped to bring about a new way of life for many Native Americans. 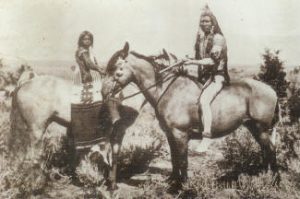 The Pueblo and Comanche people sold horses and got rich. The Sioux, the Cree, the Crow, the Blackfoot, the Ute, and other groups bought horses and started to hunt buffalo. Most of these people had been mainly settled farmers who sometimes hunted buffalo on foot. But when European settlers forced people off their land and they had to try to live in the Great Plains, many people gave up farming and took to hunting buffalo with horses full-time. 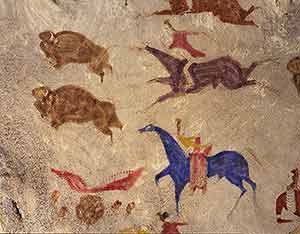 Horses saved the lives of many people who were forced to move on to the Great Plains. With horses, people could hunt enough buffalo to live, even on the Plains. Native people hunted buffalo and sold the buffalo hides to European traders in exchange for food, warm wool blankets, steel tools, and clothing. But there turned out to be disadvantages to the horses too. The horses competed with the buffalo for water, and for shelter in the winter. The more horses there were, the fewer buffalo there were. Soon there were not really enough buffalo to support the people anymore.

The biggest disadvantage was that horses made the Plains people totally dependent on hunting buffalo. When the United States army saw this, they were able to kill all the buffalo and force the Comanche and the Siouxand other people to surrender and move on to reservations. (Compare this to the similar effect that trading with Europeans had on West Africa and India.)

Where did horses first come from?
When did people first start to ride horses?
More about the buffalo