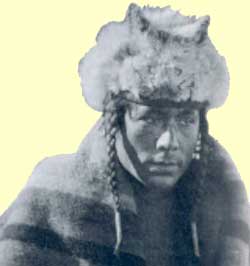 In the 1500s AD, people who called themselves the Eenou lived in the northern part of North America, around what is now the border between the United States and Canada. Modern historians call them the Cree.

Who were the Cree related to?

Cree people mostly lived in the forests of what is now Minnesota and Wisconsin. Their language was Athabascan, related to Blackfoot, Algonquin, Navajo, and Apache.

Native American languages
Who were the Blackfoot?
And the Algonquin?
What about the Apache?

Daily life for the Cree people

Cree people got their food by hunting and gathering. They hunted mainly deer and rabbits and fish. And they gathered wild rice along the riverbanks. They gathered fruit and nuts in the forest. As they travelled around harvesting their food, Cree people lived in big tents called tipis made of wooden poles and bison skins. They travelled up and down the rivers in canoes.

The Cree get horses and move West

During the 1600s and 1700s, Louis XIV sent French settlers into the Midwest. The French pushed Ojibwe and the Chippewa people westward. So the Ojibwe and Chippewa pushed the Cree westward in turn. Some Cree people stayed in the forest.

Who was Louis XIV?
Native Americans get horses
Who were the Sioux?

But others saw opportunities for a new life on the Great Plains (modern North and South Dakota and Montana). They left to live there, hunting bison. They got guns and horses from French traders, and they used them in wars against the Sioux and the Blackfoot. (But at other times the Cree were allies of the Sioux.) In return, Cree traders sold furs to French traders.

But like other people in North America at this time, the Cree had no immunity to smallpox. When they caught smallpox from these traders (or maybe from other Native American people), most of them died.

The Cree that were still alive in the 1800s spent more and more time with European settlers. Every year more and more Europeans came to live in what had been the country of the Cree. Many Cree people married French settlers.

Where do Cree people live today?

One of the European men who came, a missionary named James Evans, invented a way to write the Cree language. Soon many Cree people could read and write. They wrote down their stories and their ideas. But by the 1900s the Cree people held only a small amount of their old land. Many people of the Cree nation still live on that land today.

Did you find out what you wanted to know about Cree history? Let us know in the comments!

Neighbors of the Cree: the Algonquin

Bibliography and further reading about the Cree during this time: