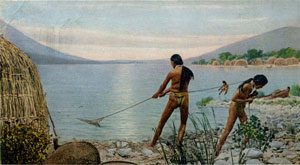 When people first came to North America, maybe about 20,000 BC, they were probably mostly following the fish along the coast and along the rivers, and fishing is what they spent most of their time doing.

In California, and along the East Coast, people like the Iroquois also gathered acorns and crushed them to make bread. Cree people gathered wild rice from shallow lakes and rivers near the Great Lakes where they lived. Ute people, near the Rocky Mountains (in modern Colorado and Utah), ate mainly wild roots and grass seeds, along with a lot of trout, berries, and meat from wild birds and deer. In the Pacific Northwest, Chinook people fished for salmon.

Who were the Iroquois?
More about the Cree
Native American food 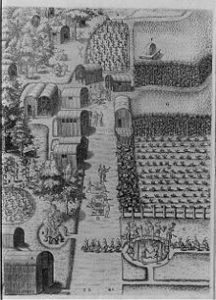 The first people in North America to start planting and harvesting their own food were the Olmec people who lived in Mexico, probably about 2000 BC. They learned how to farm corn and beans and squash from people further to their south.

The Three Sisters
History of corn
Those people further south

Gradually farming spread north to the Pueblo people living in what is now Arizona and New Mexico. But Pueblo people didn’t really settle down and start farming for most of their food until about 100 AD.

Pueblo (or Anasazi) way of life

Little by little, people began to plant corn and beans further north. By about 800 AD, the Mississippians along the Mississippi valley were planting crops. They planted corn and beans and squash, which they called the Three Sisters, all together in the same field. The Cherokee, further east, probably began to plant crops a little later. In these warm, wet places, people also learned how to grow sweet potatoes. Gradually the Crow, the Sioux, and the Cheyenne way up in Minnesota also started to plant corn, but that was too far north for sweet potatoes. 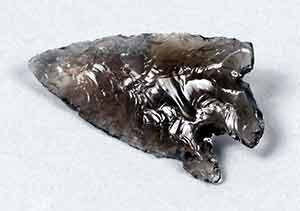 About 1000 AD, Iroquois people living in the Northeast (modern New York, Rhode Island, and Massachusetts) began to plant corn – three thousand years after the Olmec! But they had already been growing sunflowers for some time, which they had figured out on their own. And by this time the Cherokee seem to have been raising turkeys.

Why do people grow sunflowers?
Where did turkeys come from?

Iroquois people found (just as you would if you planted corn there today) that it was hard to grow corn in the short summers of the north. Often the frost came and killed the plants before the ears of corn were ready to pick. People had to get the corn to evolve into a type of corn that would get ripe in just three months, before the weather turned cold.

There was a lot of trading in canoes up and down the big rivers – the the Columbia and Willamette rivers in the Pacific Northwest, the Colorado river in the Southwest, the Mississippi and Missouri rivers, the Platte and the Snake, in the middle of the continent, and the Hudson River in the Northeast.

What did Native traders buy and sell?

Traders carried seashells for carving beads and fish-hooks. They carried furs for blankets, and stone for grindstones. They brought flint and obsidian for making arrowheads and knives. Even the stone that people used to make hoes for farming was traded from Mississippi all over the midwest, as far north as Illinois. They grew tobacco and sold that, and they sold tobacco pipes too. Probably they sold baskets and clothing, too.

What is obsidian?
History of baskets
Native American tobacco

In return, the people of Mississippi got copper from near the Great Lakes for jewelry. The Inuit, along the Arctic circle in the most northern part of North America, traded with the Algonquin and Blackfoot to their south, with Asian traders to their west, and with the Viking settlers of Greenland to their east.

More about the Inuit

By the 1300s, Pueblo people were trading with the Aztec to get bright-colored quetzal bird feathers and cocoa beans.

What did they use for money?

Native people used many different things as money: basically anything that was small and light and easy to carry, and also rare and valuable. In Mexico and the Southwest, people used cocoa beans as a form of money. All over North America, people used rare seashells. And they carved seashells and rare stones into beads.

History of chocolate
What is money?

Beads were valuable because it took a lot of work to make them, and you could easily carry a lot of them as a necklace or woven into a belt, or sewn on to your shirt. Beads also make good money because you can wear them (like gold or silver jewelry), so everyone will know how rich you are.

When the Europeans arrived

By 1500 AD, when invaders from Spain first landed in Florida, most people in North America were farming most of their food. But some groups, like the Californians, the Paiute and Ute people, and the Cree and the Chinook, were still gathering most of theirs. Now you can read about what happened to the Native economy when Europeans arrived.

Bibliography and further reading about the Native American economy:

If you’re going to write to me about the beads, please first read David Graeber, “Beads and Money: Notes toward a Theory of Wealth and Power,” American Ethnologist 23.1 (1996), 4-24.