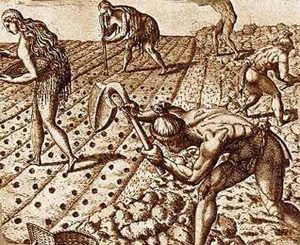 Just as in India,China, or Europe, most of the people who lived in North America around 1500 AD were farmers. There were also some people who hunted and gathered their food, like the Cree people who gathered wild rice, or the Chinook people who fished for salmon. Traders kept on shipping metals, stone, shell and furs all up and down the rivers from coast to coast.

When most of these people died of smallpox and measles, in the 1500s and 1600s AD, trade pretty much fell apart for a while. If you were catching all sorts of unheard-of diseases, you might not want to see very many strangers! But soon Spanish traders sailed to North America, looking for things they could bring back to Spain with them.

People saw that these Spanish traders had some pretty cool stuff to trade. They had guns and gunpowder and bullets. And they had whiskey that could get you drunk. They had horses, and warm wool cloth. People were happy to trade their furs for the Spanish guns and whiskey, blankets, and iron tools. At first the Spanish tried to keep the horses as their own special weapon, but Pueblo people captured Spanish horses in the Pueblo Revolt of the 1600s and sold them to other people all over the West.

The horses made a big difference to the economy of North America. With horses, many people – the Cree, the Crow, the Ute, the Blackfoot, the Sioux, the Apache – were able to hunt bison on the plains, and be nomads, instead of farming. As Europeans pushed more people into the Great Plains, where they couldn’t farm, the horses saved them. Throughout the 1700s and 1800s, many people followed the bison.

At the same time, with so many people dead from smallpox and measles, and from being killed by European invaders, there were a lot of abandoned fields and villages all over North America. And where people were still farming their land, the United States army forced them to leave it and move further west. Many people came from Europe to live on this land and farm it. Some of them volunteered, and some of them were forced to come. Many were indentured servants who had to work for richer people. When there weren’t enough of them, they forced many African people to come to North America as slaves.

So pretty soon the eastern half of North America was covered with farmers again. These farmers learned to grow North American crops like corn and beans and squash and sunflowers, but they also brought European crops like rice and wheat and beets and apples, and European farm animals like sheep, chickens, pigs and cows. They even brought over European bees! Most of these farmers didn’t just grow food for themselves to eat. They began to grow food mainly to sell, and they bought their own food in stores. They cut down the forests, and then they started to burn America’s coal. People built the first railroads and canals to ship the food to the Atlantic coast, where the big cities were.

And in those big cities, especially in the north-east, rich men built a lot of factories in the early 1800s. Instead of buying things that had been made at home or in factories in Europe, now people bought factory-made clothes and shoes and tools. And instead of working on farms, more and more people came to the cities to work in factories. A lot of people came from Europe and stayed in the cities to work. 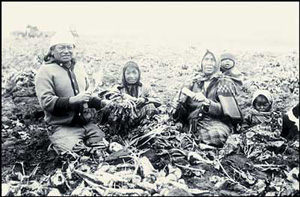 Cree women and children harvesting sugar beets in Canada in 1910 (photograph by John Woodruff; Courtesy of Library and Archives Canada)

But in the later 1800s, after the Civil War, a whole lot more people began living and working in cities, in the factories, instead of working on farms. For one thing, the United States army killed nearly all of the bison, and so people couldn’t follow the bison anymore. After the Civil War, it was illegal to own people as slaves, and so more people were sharecroppers instead. Some people in the South began to build and work in factories. Also, steamships and railroads made it easier to trade things all over North America and all over the world.

Then the invention of gasoline engines made it possible to build bigger and bigger factories to make things. In the 1900s, everybody bought most of their food and other things in stores, instead of making them in their own town or on their own farm. And more and more of them left their farms to work in the cities, in the factories. Instead of most people working on their own (or other people’s) farms, they worked for other people in the factories. It only took a few people to run the big tractors and machines that did all the farm work.

Bibliography and further reading about the economy of North America: