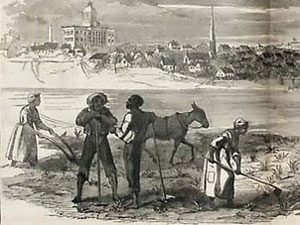 Men and women and kids working as slaves in Alabama (1861)

Poor people were coming from all over Europe to work in the northern factories, spinning and weaving. But in the South rich land-owners still forced African-American people to work as slaves in their big cotton and tobacco fields.

African-American slavery
History of tobacco
Where did cotton come from?

Why did the Civil War start?

People in the North wanted to make the southern land-owners free these people. They knew that slavery was unfair. The African-Americans wanted to be free too!

Why did the South fight?

But the Southern land-owners were afraid that ending slavery would just make the South even poorer. And the North would still be rich. That seemed unfair to them.

Why did poor white Southerners fight? 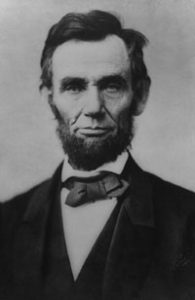 In 1860, the men who could vote elected Abraham Lincoln to be president. (But no women, or people who had recently arrived in the United States, or Native Americans, or enslaved African-Americans were allowed to vote).

The Cherokee Trail of Tears

Lincoln was a northerner, and he saw things in a Northern way. His election made the southern people so angry and afraid that they decided to split off from the United States. They formed their own country, which they called the Confederacy.

Which states joined the Confederacy?

The states of Virginia, North and South Carolina, Georgia, Florida, Alabama, Mississippi, Louisiana, Texas, Arkansas, and Tennessee were in the Confederacy. Parts of Missouri and Kentucky joined too.

Mostly these were the states where it was legal to own slaves. But there were four states (Delaware, Kentucky, Maryland, and Missouri) where slavery was legal that decided not to join the Confederacy.

Learn by doing: play this game to learn where the states are
The end of the Civil War

The end of the Civil War