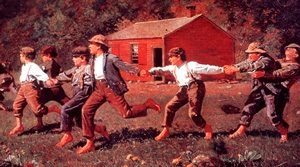 By the 1800s, most of the people living in North America were of European or African origin. Kids still often wore clothes that had been cut down for them from worn-out grown-up clothing.

Most kids, and many grown people, went barefoot whenever it was warm enough, even to school. Women usually wore shirts and long skirts down to their ankles, or even brushing the ground.

More about American people in the 1800s 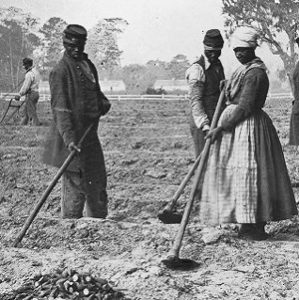 Sometimes women wore steel hoops under their skirts to make them rounder. Under their dresses, they wore petticoats, and shifts (like a nightgown), and corsets to support their breasts.

More about the history of cotton
Who invented steel?

They could afford to use more cloth because people were making clothes of cotton, which was cheaper. Many people now had both an everyday dress and a special dress for holidays or to wear to church. 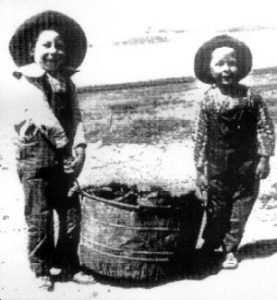 African styles came to the Americas

African women living in slavery tried to keep dressing the way they had at home – wrapping their heads with cloth, for instance. Some African styles, like the kerchief, became popular with North American women, white and black and Native American.

More about African clothing
Slavery in the United States

But enslaved women usually only had one dress, and even that was usually an old dress that a free woman didn’t want anymore. Sometimes these women had to sew their dresses out of old flour sacks.

Farming women who had to work hard on their farms, or women who were hunters or gold miners, sometimes wore pants (especially if nobody would see them). 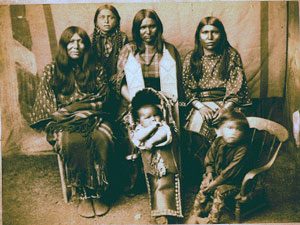 In the 1850s, men began to wear jeans, made first from hemp cloth by a Jewish man named Jacob Davis. Soon Davis started to make jeans out of cotton, along with his partner Levi Strauss. Now we call them Levi’s. They also wore denim or cotton corduroy overalls.

Men started to wear their pants down to their ankles instead of their knees. By this time, even most of the Native people were wearing mostly European clothes. But clothing styles changed again in the 1900s.