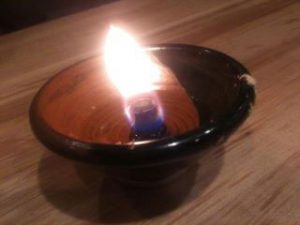 Oil is a kind of liquid made out of hydrocarbon molecules. It is mostly fat. Lots of plants and animals make oil. In North America, people got most of their oil from salmon, bison, and sunflowers. In Central America, it was avocados and nuts. In Europe, it was butter and lard from cows and pigs. In North Africa and West Asia, it was olives, and in the rest of Africa it was palm nuts. In East Asia, it was soybeans.

For most of human history, those were the kinds of oil people used not just for eating but also for lighting lamps, washing clothes, and greasing machines. But in the 1800s people were using more and more machines. Inventors turned to whale oil to use to power these machines, but whale oil was expensive. People began to look for other ways to get lots and lots of cheap oil. What they found was that they could drill wells down into the ground and tons of oil would come gushing out. That oil comes from algae that died millions of years ago. That’s what makes your car go, and what they make plastic out of, and what heats many people’s houses.

At first people were very happy to have a cheap way to get lots and lots of oil. But it turned out there were two big disadvantages. First, there’s only so much oil under the ground. If we burn it all, we’ll run out, and we’ll need to find another way to run cars and heat houses. But even worse, burning all that oil causes global warming. If we keep on burning oil, and burn all the oil that there is under the ground, Earth will probably heat up so hot that people won’t be able to live on the planet.

Because of these problems, scientists are working hard to make better solar panels and batteries, and wind generators, so we can stop using oil and use solar power and wind power instead. Already many people drive electric cars powered by solar and wind power, and many people use solar power for light in their houses. Probably we will stop using oil for most things in the next fifty years or so. Will that be too late for the planet? We’ll see.

Bibliography and further reading about the history of oil: