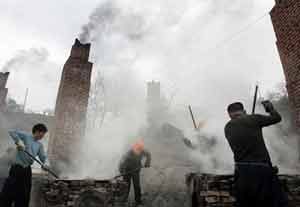 When did global warming start?

Human activities probably started to affect the world’s climate as early as about 10,000 BC. That’s when people started farming and cut down a whole lot of trees to create their fields.

Cutting down a lot of trees

Trees take in carbon dioxide and convert it to oxygen. So without them, carbon dioxide levels rose, and that trapped more sunshine and made the world warmer. When people began to use iron about 1000 BC, they again cut down a lot of trees to burn in the process of making tools and cooking pots.

Early farming
Iron and blacksmithing
Invention of the bellows
How does photosynthesis work?

Meanwhile, there were many small changes in the climate. Each one caused a lot of problems for people. A drought about 2100 BC seems to have caused Bronze Age states from Egypt to India to collapse, and spread the Yamnaya all over Eurasia. Another drought about 1200 BC may have ended the Bronze Age, and brought the Philistines to Israel. In the first years AD, climate change seems to have affected the Maya. And serious drought in Africa caused by the Little Ice Age may have made it harder for Africans to fight off European invasions. 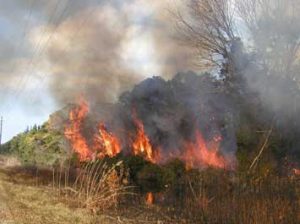 A forest fire puts carbon smoke into the air as the trees burn; that makes global warming worse.

What is coal?
The Carboniferous period
America and oil

Coal and oil are the remains of trees and other plants that died millions of years ago, in the time of the dinosaurs. Burning coal and oil releases a whole lot more carbon dioxide into the atmosphere, and it is causing much faster and more serious climate change. 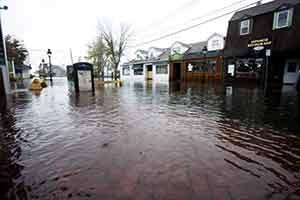 We are already feeling the effects. Warmer ocean water causes more frequent and more serious hurricanes like Hurricane Katrina in New Orleans and Hurricane Sandy in New York City, and in Bangladesh and the Philippines. Central American refugees struggling north through Mexico to the United States are fleeing drought caused by climate change, too.

What is a hurricane?
What makes the wind blow?

Melting glaciers mean snowier winters and more downpours all over northern parts of America, Europe, and Asia. The drought in California is driving up prices for fruit and vegetables in the United States, and there are more and bigger wildfires all across the American West.

A hurricane in Cuba

What can we do about it?

All of these problems are expected to get much worse within the next fifty years. Rising sea levels due to ice melting will mean that many cities near oceans will have to be abandoned or moved. Even if we change to solar and wind power now, many of these changes will still happen, because there is already so much carbon dioxide in the air. And we’re not changing now, anyway.

Learn by doing: what you can do to help
More about climate change